Icon of the Mother of God “Czestochowa” 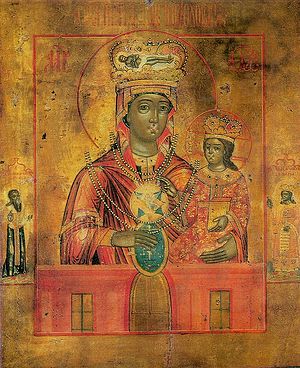 The wonderworking Czestochowa Icon of the Most Holy Theotokos is to be found in a Roman Catholic monastery at Yasna Gora near the city of Czestochowa, Petrov Province. It is believed to be one of the seventy icons painted by the holy Apostle and Evangelist Luke (October 18). Tradition says that the icon was taken from Jerusalem when the Romans conquered the city in the year 66, and was hidden in a cave near Pella. The icon was given to Saint Helen (May 21) when she visited the Holy Land in 326, and she brought it back to Constantinople with her.

Starting in the eighth century the icon traveled to various places, including Galicia, Bavaria, and Moravia. Prince Leo, who founded the city of Lvov, brought the icon to Russia and placed it in the fortress of Belz. There many miracles took place before the holy icon.

Prince Vladislav of Opolsk acquired the icon when the Poles captured southwestern Russia. At the time that Vladislav ruled in Poland, the Tatars invaded Russia and soon appeared before the gates of the fortress of Belz. The prince ordered the icon to be placed atop the city walls as the Tatars began their siege of the fortress. Blood began dripping from the icon where it had been struck by an arrow or some other projectile. Those who witnessed it were fearfully amazed at the sight. The Tatars began to retreat when a dark haze covered them, and many of them died.

Following this miraculous deliverance, Prince Vladislav planned to take the icon to Siesia and to place it in his castle at Opolsk. As preparations for the transfer were being made, Vladislav was overcome with an inexplicable fear. He began to pray before the holy icon, and that night he was told in a vision to take the icon to Yasna Gora near Czestochowa. Vladislav built a monastery at Yasna Gora in 1382 and gave the icon to an order of Roman Catholic monks.

Many years later, followers of John Hus attacked Czestochowa and plundered the monastery. When they attempted to carry the Czestochowa Icon away in a cart, the horses refused to move from the spot, held back by some invisible power. One of the Hussites became angry and threw the icon onto the ground, while another stabbed the face of the Virgin with his sword. The first man was struck dead, and the hand of the second man shriveled up.

The other invaders also suffered punishment from God. Some of them died on the spot, while others became blind. Although many of the monastery’s treasures were stolen by the Hussites, the wonderworking Czestochowa Icon was left behind.

King Carl X Gustav of Sweden occupied most of Poland in the seventeenth century, and his forces remained virtually undefeated until they fought a battle near Yasna Gora and the monastery where the icon was kept. With the help of the Most Holy Theotokos, the Poles were able to overcome the Swedes and end the war in 1656. At Lvov, King Jan Casimir officially decreed that Mother of God was the Queen of Poland, and that the nation was under her protection.

Many miracles have been worked by the Czestochowa Icon, and are recorded in a book which is kept at the Czestochowa monastery. Copies of the icon are found in many Orthodox and Roman Catholic monasteries. Some of these copies are venerated in the village of Pisarevkain in the Volhynia Province (June 29 and September 8), at Verhnaya Syrovatka in the Kharkov Province, at Tyvrov in the Vinits Province (Holy Spirit day), in the Kazan Cathedral at Saint Petersburg, and in several other places.