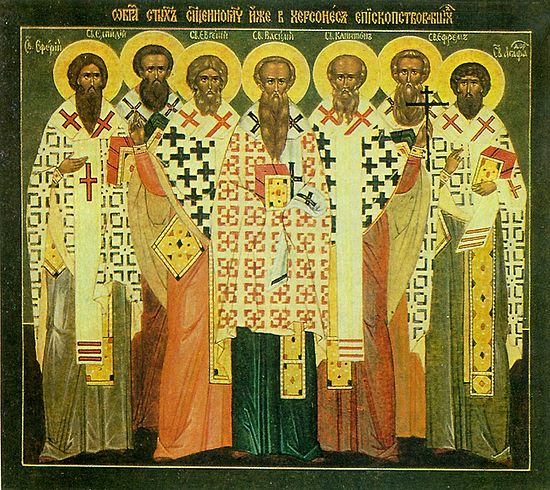 The Hieromartyrs Ephraim, Basil, Eugene, Elpidius, Agathodorus, Aetherius, and Capiton carried the Gospel of Christ into the North Black Sea region from the Danube to the Dniepr, including the Crimea. They were bishops of Cherson at different times during the fourth century, and they sealed their apostolic activity with martyrdom.Only Aetherius died in peace.

At the beginning of the fourth century a bishop’s See was established at Cherson. This was a critical period when Cherson served as a base for the Roman armies which constantly passed through the area. During the reign of Diocletian (284-305), the Patriarch of Jerusalem sent many bishops to preach the Gospel in various lands. Two of them, Ephraim and Basil, arrived in Cherson and planted the Word of God there.

Later on, Saint Ephraim went to the peoples living along the Danube, where he underwent many tribulations and sorrows. He was beheaded at the start of the persecution.

Since You have given us the miracles of Your Holy Hieromartyrs of Cherson as an invincible rampart, / foil the machinations of the ungodly, O Christ our God, / and strengthen the faith of the Orthodox Christians, / for You are good and love mankind.

The radiant day of the hierarchs and pastors in Cherson has dawned! / Let us sing hymns for the feast of those who suffered for the sheep of Christ! / Hieromartyrs, entreat Christ, the chief Shepherd, that He may number us with the sheep on His right hand, / so that we may cry aloud to you: / Rejoice, holy fathers, for you shed your blood for Christ!