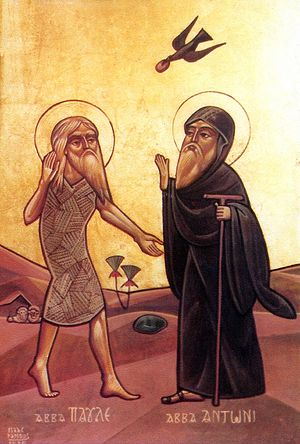 Saint Paul the Simple of Egypt also lived in the fourth century and was called the Simple for his simplicity of heart and gentleness. He had been married, but when he discovered his wife’s infidelity, he left her and went into the desert to Saint Anthony the Great (January 17). Paul was already 60 years old, and at first Saint Anthony would not accept Paul, saying that he was unfit for the harshness of the hermit’s life. Paul stood outside the cell of the ascetic for three days, saying that he would sooner die than go from there. Then Saint Anthony took Paul into his cell, and tested his endurance and humility by hard work, severe fasting, with nightly vigils, constant singing of Psalms and prostrations. Finally, Saint Anthony decided to settle Paul into a separate cell.

During the many years of ascetic exploits the Lord granted Saint Paul both discernment, and the power to cast out demons. When they brought a possessed youth to Saint Anthony, he guided the afflicted one to Saint Paul saying, “I cannot help the boy, for I have not received power over the Prince of the demons. Paul the Simple, however, does have this gift.” Saint Paul expelled the demon by his simplicity and humility.

After living for many years, performing numerous miracles, he departed to the Lord. He is mentioned by Saint John, the Abbot of Sinai (Ladder 24:30): “The thrice-blessed Paul the Simple was a clear example for us, for he was the rule and type of blessed simplicity....”