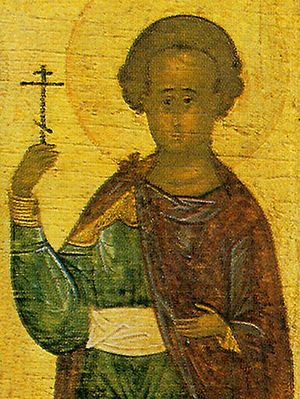 The Holy Martyr Sabinus was administrator of the Egyptian city of Hermopolis. During a persecution of Christians under the emperor Diocletian (284-305), Saint Sabinus and some like-minded companions hid in a remote village.

His hiding place was revealed by a certain ungrateful beggar who had brought him food. The saint used to feed him and help him with money, but the man betrayed him for two pieces of gold. Sabinus was seized with six other Christians, and after torture they were all drowned in the Nile in 287.

With godliness you preached to the ungodly / that the Creator of all took flesh without undergoing change. / You excelled in your holy contest, / for by meeting death in the river you attained to the Source of incorruption. / Therefore, we praise you, blessed Sabinus.

God-bearing Sabinus, / you are a divine root, an unfading blossom, / a branch heavily-laden with fruit. / Fill with gladness those who honor your memory, / and unceasingly pray for us all!