St. Cyril the Archbishop of Jerusalem 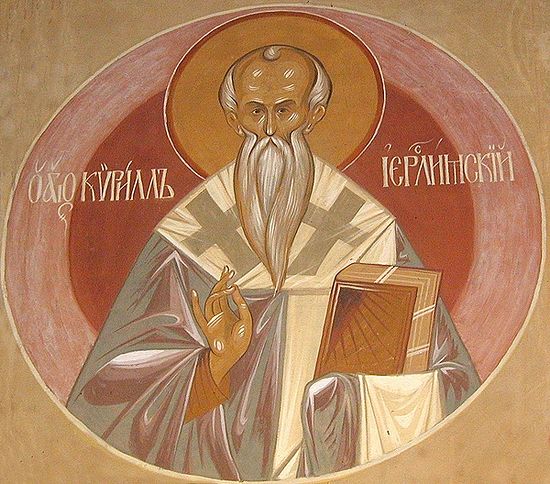 As Patriarch of Jerusalem, Saint Cyril zealously fought against the heresies of Arius and Macedonius. In so doing, he aroused the animosity of the Arian bishops, who sought to have him deposed and banished from Jerusalem.

There was a miraculous portent in 351 at Jerusalem: at the third hour of the day on the Feast of Pentecost, the Holy Cross appeared in the heavens, shining with a radiant light. It stretched from Golgotha above the Mount of Olives. Saint Cyril reported this portent to the Arian emperor Constantius (351-363), hoping to convert him to Orthodoxy.

The heretic Acacius, deposed by the Council of Sardica, was formerly the Metropolitan of Caesarea, and he collaborated with the emperor to have Saint Cyril removed. An intense famine struck Jerusalem, and Saint Cyril expended all his wealth in charity. But since the famine did not abate, the saint pawned church utensils, and used the money to buy wheat for the starving. The saint’s enemies spread a scandalous rumor that they had seen a woman in the city dancing around in clerical garb. Taking advantage of this rumor, the heretics forcibly expelled the saint.

The saint found shelter with Bishop Silvanus in Tarsus. After this, a local Council at Seleucia, at which there were about 150 bishops, and among them Saint Cyril. The heretical Metropolitan Acacius did not want to allow him to take a seat, but the Council would not consent to this. Acacius stormed out of the Council, and before the emperor and the Arian patriarch Eudoxius, he denounced both the Council and Saint Cyril. The emperor had the saint imprisoned.

When the emperor Julian the Apostate (361-363) ascended the throne he repealed all the anti-Orthodox decrees of Constantius, seemingly out of piety. Saint Cyril returned to his own flock. But after a certain while, when Julian had become secure upon the throne, he openly apostasized and renounced Christ. He permitted the Jews to start rebuilding the Temple of Jerusalem that had been destroyed by the Romans, and he even provided them part of the funds for the building from the state treasury.

Saint Cyril predicted that the words of the Savior about the destruction of the Temple down to its very stones (Luke. 21:6) would undoubtedly transpire, and the blasphemous intent of Julian would come to naught. Soon there was such a powerful earthquake, that even the solidly set foundation of the ancient Temple of Solomon shifted in its place, and what had been rebuilt fell down and shattered into dust. When the Jews resumed construction, a fire came down from the heavens and destroyed the tools of the workmen. Great terror seized everyone. On the following night, the Sign of the Cross appeared on the clothing of the Jews, which they could not remove by any means.

After this heavenly confirmation of Saint Cyril’s prediction, they banished him again, and the bishop’s throne was occupied by Saint Cyriacus. But Saint Cyriacus soon suffered a martyr’s death (October 28).

After the emperor Julian perished in 363, Saint Cyril returned to his See, but during the reign of the emperor Valens (364-378) he was exiled for a third time. It was only under the holy emperor Saint Theodosius the Great (379-395) that he finally returned to his archpastoral activity. In 381 Saint Cyril participated in the Second Ecumenical Council, which condemned the heresy of Macedonius and affirmed the Nicea-Constantinople Symbol of Faith (Creed).

Saint Cyril’s works include twenty-three Instructions (Eighteen are Catechetical, intended for those preparing for Baptism, and five are for the newly-baptized) and two discourses on Gospel themes: “On the Paralytic,” and “Concerning the Transformation of Water into Wine at Cana.”

“The articles of the Faith,” Saint Cyril teaches, “were not written through human cleverness, but they contain everything that is most important in all the Scriptures, in a single teaching of faith. Just as the mustard seed contains all its plethora of branches within its small kernel, so also does the Faith in its several declarations combine all the pious teachings of the Old and the New Testaments.”

Saint Cyril, a great ascetic and a champion of Orthodoxy, died in the year 386.

You were seen in Zion clothed in a robe of godliness / As an illustrious pillar of the Apostles’ faith. / You became an heir to their grace, / Setting forth their pious doctrines / And dispensing their talents of wisdom. / O Cyril, our Father and hierarch, pray for us.

With your lips, O wise Cyril, / And through divine inspiration / You enlightened your people / To the worship of the one Trinity, / Undivided in essence, yet divided in Hypostases. / Wherefore rejoicing, we celebrate your all-holy memory, / Offering you as our intercessor before God.