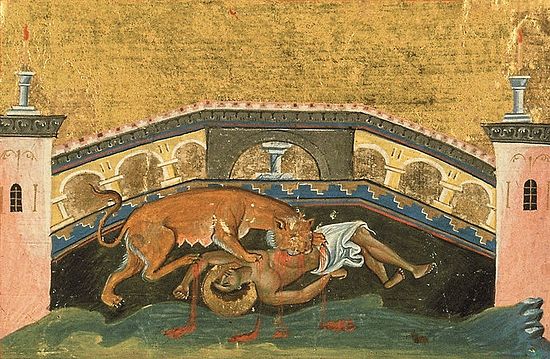 Hieromartyr Basil was a presbyter in Ancyra, Galatia. Fighting against the Arian heresy, he urged his flock to cling firmly to Orthodoxy. Because of this Saint Basil was deposed from his priestly rank by a local Arian council, but a Council of 230 bishops in Palestine reinstated him.

Saint Basil openly continued to preach and denounce the Arians. Therefore, he became the victim of persecution and was subjected to punishment as a man dangerous to the state. Two apostates, Elpidios and Pegasios, were ordered to turn Saint Basil from Orthodoxy. The saint remained unshakable, and was again subjected to tortures.

When the emperor Julian the Apostate (361-363) arrived in the city of Ancyra, Saint Basil bravely confessed Christ before him at the trial, and denounced the emperor for his apostasy. Julian ordered that strips of skin be cut from the saint’s back. Saint Basil endured the gruesome torture with great patience.

When they began to beat his shoulders and stomach with red-hot rods, he fell down upon the ground from the torments and cried out, “O Christ, my Light! O Jesus, my Hope! Quiet Haven from the stormy sea. I thank You, O Lord God of my fathers, that You have snatched my soul from the pit of Hell and preserved Your Name in me unstained! Let me finish my life a victor and inherit eternal life according to the promise You gave my fathers. Now accept my soul in peace, plying steadfast in this confession! For You are merciful and great is Your mercy, You Who live and sojourn throughout all the ages. Amen.”

Having made such prayer, and lacerated all over by the red-hot rods, the saint fell into a sweet slumber, giving up his soul into the hands of God. The Hieromartyr Basil died June 29, 362. His commemoration was transferred to March 22 because of the Feast of Saints Peter and Paul.

This saint should not be confused with Saint Basil of Ancyra (January 1), a layman.

Through the inspiration of the Holy Spirit you worthily received the anointing of the priesthood, O Basil. / You offered your martyr’s contest / as a royal sacrifice to the King of the Ages. / Righteous Father, entreat Christ God to grant us His great mercy.

Having run the race in righteousness, / You preserved the faith, O Hieromartyr Basil. / For this you were made worthy of the crown of martyrdom, / And You have become an unshakable pillar of the Church, / Confessing the undivided Trinity: the Son, co-eternal with the Father and the Spirit. / Entreat Him to deliver those who honor you from distress, / That we may cry to you: Rejoice, O divinely wise Basil!

As a priest of the King of Glory, / you also became a holy warrior by your contest. / You shamed the counsels of the lawless / and received the enjoyment of the heavenly Kingdom, / blessed hieromartyr of Christ, Basil.