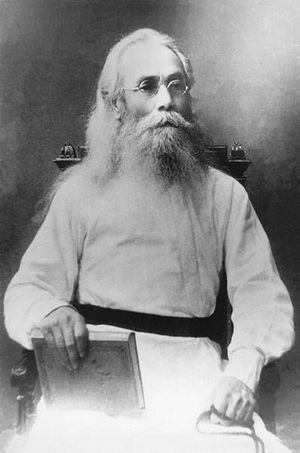 Photo: optina.ru
Paul I. Plikhankov was born in the city of Samara on July 5,1845, the son of John and Natalia Plikhankov. His mother died in childbirth, and his father later remarried so that his son would have a mother. Although his stepmother was very strict, she was a real mother to him, and he loved her very much.

As a descendant of the Orenburg Cossacks, Paul was enrolled in the Polotsk Cadet Corps. He completed his studies at the Orenburg Military School and received an officer’s commission. He later graduated from the Petersburg Cossack Staff Officers’ School, and also served at the headquarters of the Kazan military district and eventually rose to the rank of colonel.

Once, as he was sick with pneumonia, Paul sensed that he was about to die. He asked his orderly to read the Gospel to him, and passed out. Then he had a vision in which the heavens seemed to open, and he was afraid because of the great light. His whole sinful life passed before him, and he was overcome with repentance. A voice told him he should go to Optina Monastery, but the doctors did not think he would recover. His health did improve, however, and the colonel visited Optina. In August 1889 the Elder of the Monastery was Saint Ambrose (October 10), who told Paul to set his worldly affairs in order. Two years later, Saint Ambrose blessed him to cut all ties to the world and told him to enter Optina within three months.

It was not easy for the colonel to resign his commission within the specified three month period, because obstacles were placed in his way. In fact, he was offered a promotion to the rank of general, and was asked to delay his retirement. Some people even tried to arrange a marriage for him, laughing at his intention to go to the monastery. Only his stepmother was happy that he wished to become a monk. On the very last day of the three months he concluded his affairs and arrived at Optina. However, Saint Ambrose was already laid out in his coffin in the church.

Saint Anatole I (January 25) succeeded Father Ambrose as Elder, and he assigned Paul to Hieromonk Nectarius (April 29) as his cell attendant. He was accepted as a novice in 1892, and tonsured as a rassophore in 1893. Over the next ten years he advanced through the various stages of monastic life, including ordination as deacon (1902), and as priest (1903). The monk Paul was secretly tonsured into the mantiya in December of 1900 because of a serious illness. When they asked him what name he wished to receive, he said it did not matter. They named him in honor of Saint Barsanuphius of Tver and Kazan (April 11). Although he recovered, they did not give him the mantiya until December of 1902 after the Liturgy when it was revealed that he had been tonsured on his sickbed.

On September 1, 1903 Father Barsanuphius was appointed to assist Elder Joseph, the skete Superior, in the spiritual direction of the skete brethren and the sisters of the Shamordino convent.

At the beginning of the Russo-Japanese war in 1904, Father Barsanuphius was sent to the Far East as a military chaplain, where he ministered to wounded soldiers. The war ended in August 1905, and Saint Barsanuphius returned to Optina on November 1, 1905.

Since Elder Joseph had become too old and frail to administer the skete’s affairs, Father Barsanuphius was appointed as Superior of the skete in his place. Father Barsanuphius soon reestablished order and discipline, paid off debts, repaired buildings, etc. As Superior, he combined strictness with paternal concern and tenderness for those under him.

Saint Barsanuphius, like the other Elders of Optina, possessed the gifts of clairvoyance and of healing people afflicted with physical and spiritual ailments. One of his spiritual sons, Father Innocent Pavlov, recalled his first Confession with the Elder. He became fearful because Father Barsanuphius seemed to know his innermost thoughts, reminding him of people and events which he had forgotten. The saint spoke gently and told him that it was God who had revealed to him these things about Father Innocent. “During my lifetime, do not tell anyone about what you are experiencing now,” he said, “but you may speak of it after my death.”

Saint Barsanuphius loved spiritual books, especially the Lives of the Saints. He often told people that those who read these Lives with faith benefit greatly from doing so. The answers to many of life’s questions can be found by reading the Lives of the Saints, he said. They teach us how to overcome obstacles and difficulties, how to stand firm in our faith, and how to struggle against evil and emerge victorious. Although the Lives of the Saints were widely available, it saddened the Elder that more people did not read them.

Saint Barsanuphius commemorated many saints each day during his Rule of prayer, and this was not accidental. Each saint, he once explained, had some particular importance in his life. If, for example, some significant event took place, he would look to see which saints were commemorated on that day, then he would begin to commemorate them each day. Later he noticed that on their Feast Day, they would often deliver him from some danger or trouble. On December 17, 1891, the commemoration of the Prophet Daniel and the three holy youths, he left Kazan and never returned. That was the day he decided to leave the world, and Saint Barsanuphius felt that God had delivered him from a furnace of passions. Just as the three youths were delivered from the fiery furnace because they would not bow down before idols, the Elder always believed that he left the world unharmed because he refused to bow down before the idols of lust, pride, gluttony, etc.

By 1908, Saint Barsanuphius seemed to fall ill more frequently, and began to speak of his approaching death. In April of that year, someone sent him a package containing the Great Schema. Father Barsanuphius had long desired to be tonsured into the Great Schema before his death, but he had told no one of this except for the archimandrite. Therefore, he regarded this as a sign that he would soon die.

One night in July 1910, the Elder became so ill that he had to leave church during Vigil and return to his cell. The next morning, July 11, he was so weak that he could not sit up by himself. That evening he was tonsured into the Great Schema.

Father Barsanuphius began to recover, but there were new problems in the monastery. New monks came in from spiritually lax environments. They did not understand the ascetical nature of monasticism or the whole notion of eldership, and so they began to clamor for reform and change. They wanted to assume positions of authority, and to close the skete. Because of their complaints, Father Barsanuphius was removed from Optina and assigned as igumen of the Golutvinsky Monastery. When he arrived to take up his duties, Father Barsanuphius found the monastery in a state of physical and spiritual decline. Nevertheless, he did not lose heart, and soon the monastery began to revive. More people began to visit, once they heard that an Optina Elder had come to Goluvinsky, and the monastery’s financial position also began to improve. However, the rebellious brethren caused him great sorrow, and he had to expel some of them

At the beginning of 1913, Saint Barsanuphius became ill again and asked Metropolitan Macarius of Moscow for permission to retire to Optina, but that was not to be. He fell asleep in the Lord on April 1, and his body remained in the church of Golotvino until April 6 (which was also Lazarus Saturday). After the funeral, his body was placed on a train and sent to Optina for burial. The train arrived at Kozelsk Station on April 8, and the coffin was carried to Optina by clergy.

The Moscow Patriarchate authorized local veneration of the Optina Elders on June 13, 1996. The work of uncovering the relics of Saints Leonid, Macarius, Hilarion, Ambrose, Anatole I, Barsanuphius and Anatole II began on June 24/July 7, 1998 and was concluded the next day. However, because of the church Feasts (Nativity of Saint John the Baptist, etc.) associated with the actual dates of the uncovering of the relics, Patriarch Alexey II designated June 27/July 10 as the date for commemorating this event. The relics of the holy Elders now rest in the new church of the Vladimir Icon of the Mother of God.