St. Eutychius the Patriarch of Constantinople 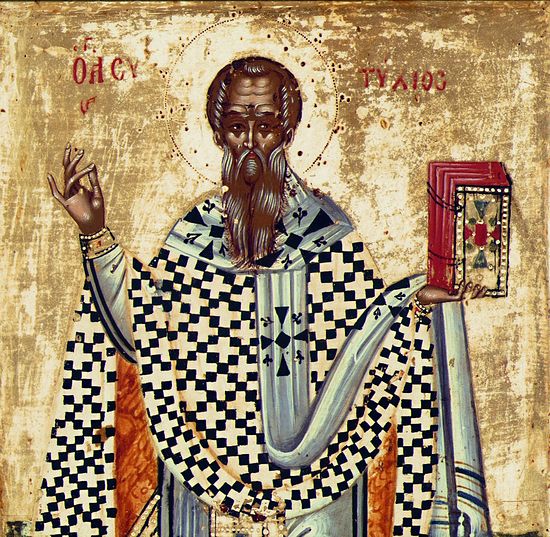 Saint Eutychius, Archbishop of Constantinople, was born in a village called “Divine” in the province of Phrygia. His father Alexander was a soldier, and his mother Synesia was the daughter of the priest Hesychius of Augustopolis. Saint Eutychius received the first rudiments of his education and a Christian upbringing from his grandfather the priest.

Once, while playing a childhood game, the boy wrote his own name with the title of Patriarch. By this he seemed to predict his future service. He was sent to Constantinople at age twelve for further education. The youth persevered in his study of science and realized that human wisdom is nothing in comparison to the study of divine Revelation. Therefore, he decided to dedicate himself to monastic life. Saint Eutychius withdrew into one of the Amasean monasteries and received the angelic schema. For his strict life he was made archimandrite of all the Amasean monasteries, and in 552 was appointed to the Patriarchal throne.

When the Fifth Ecumenical Council prepared to assemble during the reign of the holy emperor Justinian (527-565), the Metropolitan of Amasea was ill and he sent Saint Eutychius in his place. At Constantinople the aged Patriarch Saint Menas (August 25) saw Saint Eutychius and predicted that he would be the next Patriarch. After the death of the holy Patriarch Menas, the Apostle Peter appeared in a vision to the emperor Justinian and, pointing his hand at Eutychius, said, “Let him be made your bishop.”

At the very beginning of his patriarchal service, Saint Eutychius convened the Fifth Ecumenical Council (553), at which the Fathers condemned the heresies cropping up and anathematized them. However, after several years a new heresy arose in the Church: Aphthartodocetism [asartodoketai] or “imperishability” which taught that the flesh of Christ, before His death on the Cross and Resurrection, was imperishable and not capable of suffering.

Saint Eutychius vigorously denounced this heresy, but the emperor Justinian himself inclined toward it, and turned his wrath upon the saint. By order of the emperor, soldiers seized the saint in the church, removed his patriarchal vestments, and sent him into exile to an Amasean monastery (565).

The saint bore his banishment with meekness, and lived at the monastery in fasting and prayer, and he worked many miracles and healings.

Thus, through his prayer the wife of a devout man, Androgenes, who had given birth only to dead infants, now gave birth to two sons who lived to maturity. Two deaf-mutes received the gift of speech; and two grievously ill children were restored to health. The saint healed a cancerous ulcer on the hand of an artist. The saint also healed another artist, anointing his diseased hand with oil and making over it the Sign of the Cross.

The saint healed not only bodily, but also spiritual afflictions: he banished the devil out of a girl that had kept her from Holy Communion; he expelled a demon from a youth who had fled from a monastery (after which the youth returned to his monastery); he healed a drunken leper, who stopped drinking after being cleansed of his leprosy.

During the Persian invasion of Amasea and its widespread devastation, they distributed grain to the hungry from the monastery granaries on the saint’s orders, and by his prayers, the stores of grain at the monastery were not depleted.

Saint Eutychius received from God the gift of prophecy. He revealed the names of two of Emperor Justinian’s successors: Justin (565-578) and Tiberias (578-582).

After the death of the holy Patriarch John Scholastikos, Saint Eutychius returned to the cathedra in 577 after his twelve year exile, and he again wisely ruled his flock.

Four and a half years after his return to the Patriarchal throne, in 582, Saint Eutychius gathered together all his clergy on Thomas Sunday, blessed them, and peacefully fell asleep in the Lord.

In truth you were revealed to your flock as a rule of faith, / an image of humility and a teacher of abstinence; / your humility exalted you; / your poverty enriched you. / Hierarch Father Eutychius, / entreat Christ our God / that our souls may be saved.

Let us all chant with faith and love, O people, / blessing the godly Eutychius as a great pastor and minister, / an all-wise teacher and expeller of heresies, / for he entreats the Lord on behalf of us all!