Martyr Eupsychius of Caesarea, in Cappadocia 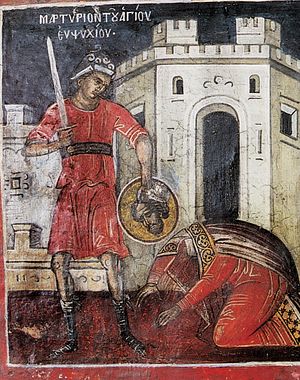 Photo: Days.Pravoslavie.Ru
The Holy Martyr Eupsychius was born in the city of Caesarea in Cappadocia and received a Christian upbringing by his illustrious parents.

During the reign of Julian the Apostate (361-363), Saint Eupsychius entered into a Christian marriage.

Saint Eupsychius was filled with zeal for the Lord, and he destroyed the temple. He knew that this would inevitably result in his punishment. Saint Eupsychius distributed all his possessions to the poor and prepared himself for martyrdom.

The enraged emperor Julian loosed his wrath not only upon Saint Eupsychius, but against all the inhabitants of this city. Some of the citizens were executed, while the more respectable were sent into exile. Christian clergy were drafted into military service, and he looted the churches of anything valuable. The city was deprived of its title Caesarea [i.e. “Imperial”] and resumed its original name of Maza. He also imposed a severe tax on the inhabitants. The emperor threatened to annihilate the city altogether, if the people did not build a new pagan temple in place of the one destroyed.

Julian tried to compel Saint Eupsychius to offer sacrifice to idols. For many days they tormented the saint on a rack, and also with iron claws. But his faith was firm, and the judge sentenced the martyr to be beheaded with a sword.

Then Julian embarked on a campaign against the Persians, marching through Cappadocia and approaching Caesarea. Danger threatened the city, since the emperor intended to raze it to its foundations. But then Saint Basil the Great (January 1), showing Julian the proper respect as sovereign authority, came out to meet him carrying with him three loaves of barley bread, which he ate. The emperor ordered his retainers to take the loaves, and to give Saint Basil a pinch of hay saying, “You have given us barley, cattle fodder. Now receive hay from us in return.”

The saint answered, “O Emperor, we bring you that which we ourselves eat, and you give us cattle feed. You mock us, since you, by your might, are not able to transform hay into bread, the essential food of mankind.”

Julian angrily retorted, “I’ll shove this hay down your throat when I return here from Persia. I shall raze this city to its very foundations, and plow over this ground and turn it into a field. I know that it was on your advice that the people dared to destroy the statues and temple of Fortuna.”

After this the emperor continued on his way, but soon perished in his campaign against the Persians. He was struck down in the year 363 by the holy Great Martyr Mercurius (November 24).

After the emperor’s demise, the Christians of the city of Caesarea built a splendid church over the grave of Saint Eupsychius, and from his holy relics they received help and healing.

With steadfast heart you finished your course and cast down the wily foe, / for you were armed with the power of the Cross, blest Eupsychius. / You were numbered with the host of martyrs and have attained eternal glory. / Always entreat Christ our God to save us who honor you.

As a living temple of Christ the Lord / you destroyed the ungodly temple, / and through your steadfast toils, Martyr Eupsychius, / you built a dwelling in Paradise.