St. Barsanuphius the Bishop of Tver 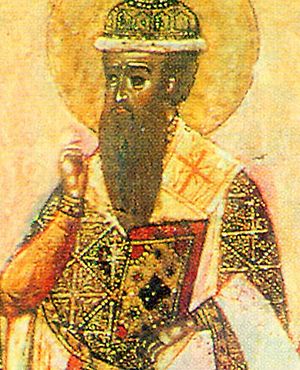 Saint Barsanuphius of Tver was born in the year 1495, and was from Serpukhov. He was named John in Baptism, and he was taught to read and write. While still a youth, he was captured by the Crimean Tatars. Accepting this as the Lord’s will, he meekly submitted to his masters, and dutifully accomplished the work they assigned him to do. After three years, John’s father ransomed him. He then went to Moscow and became a monk in the Andronikov Monastery, where he received the monastic name Barsanuphius.

Devoting himself to the ascetical life, he became proficient in virtue and piety. In 1544, he was appointed as igumen of the Pesnosha Monastery. Later, he went to Kazan and founded a monastery dedicated to the Transfiguration of the Lord.

While in Kazan, Archimandrite Barsanuphius was able to help Saint Gurias (December 5) in spreading Christianity among the Moslems and pagans. His knowledge of the Tatar language proved to be very useful in this work.

In 1567, Saint Barsanuphius was consecrated Bishop of Tver. He healed many sick people with his knowledge of medicine, but he also healed those suffering from infirmities of the soul.

When the God-pleaser reached old age, he returned to Kazan and to the Transfiguration Monastery which he founded. There he received the Great Schema, and he died at the monastery in 1576.

The holy relics of Saints Gurias and Barsanuphius were uncovered on October 4, 1596. They were placed in shrines in a side chapel of the church at the orders of Patriarch Job. On June 20, 1630 their grace-filled relics were transferred from the Transfiguration Monastery to the Cathedral of the Annunciation.