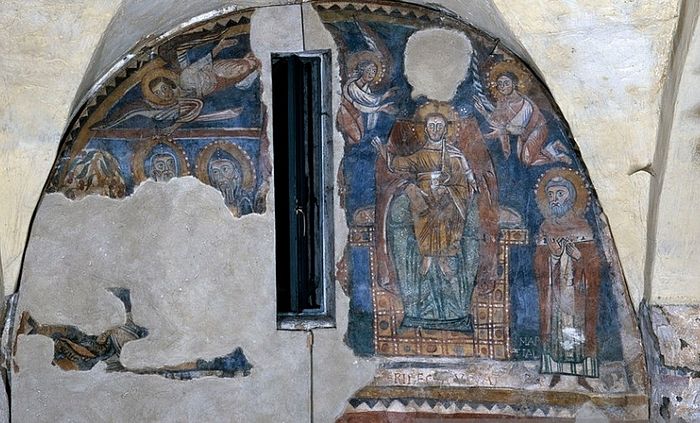 Italy, Umbria, Spoleto, Church of Saint Ansano. Whole artwork view. Fragment of a fresco relocated in 1971 after a previous detachment and restoration. In the upper part an enthroned Madonna and Child with Saints Isaac and Martial. Photo: http://www.gettyimages.com

Saint Isaac the Syrian lived during the mid-sixth century. He came to the Italian city of Spoleto from Syria. The saint asked permission of the church wardens to remain in the temple, and he prayed in it for two and a half days. One of the church wardens began to reproach him with hypocrisy and struck him on the cheek. Then the punishment of God came upon the church warden. The devil threw him down at the feet of the saint and cried out, “Isaac, cast me out!” Just as the saint bent over the man, the unclean spirit fled.

News of this quickly spread throughout the city. People began to flock to the saint, offering him help and the means to build a monastery. The humble monk refused all this. He left the city and settled in a desolate place, where he built a small cell. Disciples gathered around the ascetic, and so a monastery was formed. When his disciples asked the Elder why he had declined the gifts, he replied, “A monk who acquires possessions is no longer a monk.”

Saint Isaac was endowed with the gift of clairvoyance. Saint Gregory Dialogus (March 12) speaks of this in his “Dialogues About the Lives and Miracles of the Italian Fathers.” Once, Saint Isaac bade the monks to leave their spades in the garden for the night, and in the morning he asked them to prepare food for the workers. Some robbers, equal to the number of spades, had come to rob the monastery, but the power of God forced them to abandon their evil intent. They took the spades and began to work. When the monks arrived in the garden, all the ground had been dug up. The saint greeted the toilers and invited them to refresh themselves with food. Then he admonished them to stop their thievery, and gave them permission to come openly and pick the fruits of the monastery garden.

Another time, two almost naked men came to the saint and asked him for clothing. He told them to wait a bit, and sent a monk into the forest. In the hollow of a tree he found the fine clothes the travelers had hidden in order to to deceive the holy igumen. The monk brought back the clothes, and Saint Isaac gave them to the wanderers. Seeing that their fraud was exposed, they fell into great distress and shame.

It happened that a certain man sent his servant to the saint with two beehives. The servant hid one of these hives along the way. The saint said to the servant, “I accept the gift, but be careful when you go back for the beehive that you hid. Poisonous snakes have entered into it. If you stretch forth your hand, they will bite you.” Thus the saint unmasked the sins of people wisely and without malice, desiring salvation for all.

Saint Isaac died in 550. This saint should not be confused with the other Saint Isaac the Syrian, Bishop of Ninevah, who lived during the seventh century (January 28).