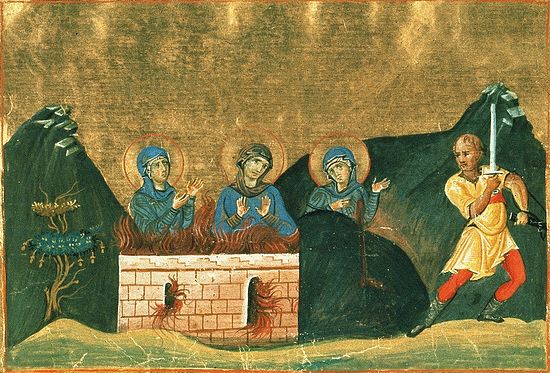 The Holy Martyrs Agape, Irene, and Chionia were sisters who lived at the end of the third century to the beginning of the fourth century, near the Italian city of Aquilea. They were left orphaned at an early age.

The young women led a pious Christian life and they turned down many offers of marriage. Their spiritual guide was the priest Xeno. It was revealed to him in a vision that he would die very soon, and that the holy virgins would suffer martyrdom. Also at Aquilea and having a similar vision was the Great Martyr Anastasia (December 22), who is called “Deliverer from Potions,” because she fearlessly visited Christians in prison, encouraging them and healing them from potions, poisons, and other harmful things. The Great Martyr Anastasia visited to the sisters and urged them to endure all things for Christ. Soon what was predicted in the vision came to pass. The priest Zeno died, and the three virgins were arrested and brought to trial before the emperor Diocletian (284-305).

Saint Chionia (“snow” in Greek) preserved the purity of her baptism according to the words of the Prophet-King David, “You will wash me, and I shall be whiter than snow” (Ps. 50/51:7).

Saint Irene (“peace” in Greek) preserved the peace of Christ within herself and manifested it to others, according to the Savior’s word, “My peace I give you” (John 14:27).

Seeing the youthful beauty of the sisters, the emperor urged them to deny Christ and he promised to find them illustrious bridegrooms from his entourage. The holy sisters replied that their only Bridegroom was Christ, for Whom they were ready to suffer. The emperor demanded they renounce Christ, but neither the elder sisters, nor the youngest, would consent. They called the pagan gods mere idols made by human hands, and they preached faith in the true God.

By order of Diocletian, who was leaving for Macedonia, the holy sisters were also to be brought there. And they brought them to the court of the governor Dulcititus.

When he saw the beauty of the holy martyrs, he was aroused with impure passion. He put the sisters under guard, and he told them that they would receive their freedom if they agreed to fulfill his desires. But the holy martyrs replied that they were prepared to die for their Heavenly Bridegroom, Christ.

Then Dulcititus decided to have his way by force. When the holy sisters arose at night to glorify the Lord in prayer, Dulcititus came to the door and tried to enter, but an invisible force prevented him. He staggered about, unable to find his way out. Then he fell down in the kitchen among the cooking utensils, the pots and pans, and he was covered all over with soot. The servants and the soldiers recognized him only with difficulty. When he saw himself in a mirror, he then realized that the holy martyrs had made a fool of him, and he decided to take his revenge on them.

At his court, Dulcititus gave orders to strip the holy martyrs. But the soldiers were not able to do this, no matter how much they tried. Their clothing seemed to be stuck to the bodies of the holy virgins. During the trial Dulcititus suddenly fell asleep, and no one could rouse him. Just as they carried him into his house, he immediately awoke.

When they reported everything that had happened to the emperor Diocletian, he became angry with Dulcititus and he gave the holy virgins over to Sisinius for trial. He began with the youngest sister, Irene. Seeing that she remained unyielding, he sent her to prison and then attempted to sway Saints Chionia and Agape. He also failed to make them renounce Christ, and Sisinius ordered that Saints Agape and Chionia be burned. On hearing the sentence, the sisters gave thanks to the Lord for their crowns of martyrdom. In the fire, Agape and Chionia surrendered their pure souls to the Lord.

When the fire went out, everyone saw that the bodies of the holy martyrs and their clothing had not been scorched by the fire, and their faces were beautiful and peaceful, as if they were asleep. On the day following, Sisinius gave orders to bring Saint Irene to court. He threatened her with the fate of her older sisters and he urged her to renounce Christ. Then he threatened to hand her over for defilement in a brothel. But the holy martyr answered, “Even if my body is defiled by force, my soul will never be defiled by renouncing Christ.”

When the soldiers of Sisinius led Saint Irene to the brothel, two luminous soldiers overtook them and said, “Your master Sisinius commands you to take this virgin to a high mountain and leave her there, and then return to him and report to him that you have fulfilled his command.” And the soldiers did so.

When they reported back to Sisinius, he flew into a rage, since he had given no such orders. The luminous soldiers were angels of God, saving the holy martyr from defilement. Sisinius went to the mountain with a detachment of soldiers and saw Saint Irene on the summit. For a long while they searched for the way to the top, but they could not find it. Then one of the soldiers wounded Saint Irene with an arrow. The martyr cried out to Sisinius, “I mock your impotent malice, and I go my Lord Jesus Christ pure and undefiled.” Having given thanks to the Lord, she lay down upon the ground and surrendered her soul to God on the very day of Holy Pascha (+ 304).

The Great Martyr Anastasia heard about the end of the holy sisters, and she buried their bodies with reverence.

Sisters in the flesh united in the Spirit, / you wrestled with the prince of evil and endured your martyrdom. / Holy and blest Agape, Irene, and Chionia, / pray to Christ our God to save our souls.

Completing the course of your life in martyrdom / And having kept the faith, / As lambs endowed with reason / You were led before Christ the Lamb and Shepherd. / Therefore rejoicing now in spirit, / We celebrate your wondrous and holy memory, / Magnifying Christ.

Bright mirrors of virginity, / radiant with your martyrdom, / you fill the Church with light and dispel the darkness of evil, / Agape, Irene, and Chionia, Christ’s precious jewels.

Becoming beautiful brides of Christ, / You offered to Him a gift of blood and sacrifice, / O passion-bearing maidens, / Irene, Agape and glorious Chionia, / Rightly entering the bridal chamber, / Ever filled with ineffable enlightenment. / Therefore celebrating in spirit / Your precious and holy memory, / We give glory to the Savior / And cry out in piety: / Pray to the Lord for us.