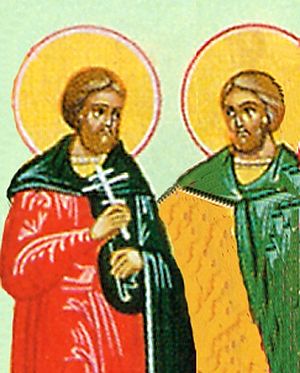 The Holy Martyrs Isaac, Apollos and Quadratus were pagans who served at the court of the emperor Diocletian (284-305). They were among the spectators who witnessed the sufferings of the Holy Great Martyr George (April 23).

His faith, valor and miracles caused them to believe in Christ. The saints openly declared themselves Christians, and reproached the emperor for his impiety and cruelty. They were sentenced to death. The martyr Quadratus was beheaded with a sword, and the martyrs Apollos and Isaac perished by starvation (+ 303).