Commemorated on April 25/May 8 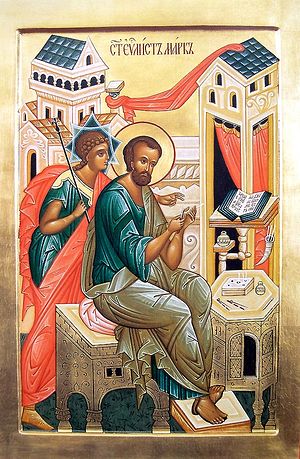 The Holy Apostle and Evangelist Mark, also known as John Mark (Acts 12:12), was one of the Seventy Apostles, and was also a nephew of Saint Barnabas (June 11). He was born at Jerusalem. The house of his mother Mary adjoined the Garden of Gethsemane. As Church Tradition relates, on the night that Christ was betrayed he followed after Him, wrapped only in a linen cloth. He was seized by soldiers, and fled away naked, leaving the cloth behind (Mark 14:51-52). After the Ascension of the Lord, the house of his mother Mary became a place where Christians gathered, and a place of lodging for some of the Apostles (Acts 12:12).

Saint Mark was a very close companion of the Apostles Peter and Paul (June 29) and Barnabas. Saint Mark was at Seleucia with Paul and Barnabas, and from there he set off to the island of Cyprus, and he traversed the whole of it from east to west. In the city of Paphos, Saint Mark witnessed the blinding of the sorcerer Elymas by Saint Paul (Acts 13:6-12).

Saint Mark met Saint Paul in Antioch. From there he went with Saint Barnabas to Cyprus, and then he went to Egypt again, where he and Saint Peter founded many churches. Then he went to Babylon. From this city the Apostle Peter sent an Epistle to the Christians of Asia Minor, in which he calls Saint Mark his son (1 Pet 5:13).

When the Apostle Paul came to Rome in chains, Saint Mark was at Ephesus, where Saint Timothy (January 4) was bishop. Saint Mark went with him to Rome. There he also wrote his holy Gospel (ca. 62-63).

From Rome Saint Mark traveled to Egypt. In Alexandria he started a Christian school, which later produced such famous Fathers and teachers of the Church as Clement of Alexandria, Saint Dionysius of Alexandria (October 5), Saint Gregory Thaumatourgos (November 5), and others. Zealous for Church services, Saint Mark composed a Liturgy for the Christians of Alexandria.

Saint Mark preached the Gospel in the inner regions of Africa, and he was in Libya at Nektopolis.

During these journeys, Saint Mark was inspired by the Holy Spirit to go again to Alexandria and confront the pagans. There he visited the home of Ananias, and healed his crippled hand. The dignitary happily took him in, listened to his words, and received Baptism.

Following the example of Ananias, many of the inhabitants of that part of the city where he lived were also baptized. This roused the enmity of the pagans, and they wanted to kill Saint Mark. Having learned of this, Saint Mark made Ananias a bishop, and the three Christians Malchos, Sabinos, and Kerdinos were ordained presbyters to provide the church with leadership after his death.

The pagans seized Saint Mark when he was serving the Liturgy. They beat him, dragged him through the streets and threw him in prison. There Saint Mark was granted a vision of the Lord Jesus Christ, Who strengthened him before his sufferings. On the following day, the angry crowd again dragged the saint through the streets to the courtroom, but along the way Saint Mark died saying, “Into Your hands, O Lord, I commend my spirit.”

The pagans wanted to burn the saint’s body, but when they lit the fire, everything grew dark, thunder crashed, and there was an earthquake. The pagans fled in terror, and Christians took up the body of Saint Mark and buried it in a stone crypt. This was on April 4, 63. The Church celebrates his memory on April 25.

In the ancient iconographic tradition, which adopted symbols for the holy Evangelists borrowed from the vision of Saint John the Theologian (Rev 4:7) and the prophecy of Ezekiel (Ez. 1:10), the holy Evangelist Mark is represented by a lion, symbolizing the might and royal dignity of Christ (Rev 5:5).

Saint Mark wrote his Gospel for Gentile Christians, emphasizing the words and deeds of the Savior which reveal His divine Power. Many aspects of his account can be explained by his closeness to Saint Peter. The ancient writers say that the Gospel of Mark is a concise record of Saint Peter’s preaching.

One of the central theological themes in the Gospel of Saint Mark is the power of God achieving what is humanly impossible. The Apostles performed remarkable miracles with Christ (Mark 16:20) and the Holy Spirit (Mark 13:11) working through them. His disciples were told to go into the world and preach the Gospel to all creatures (Mark 13:10, 16:15), and that is what they did.

From your childhood the light of truth enlightened you, O Mark, / and you loved the labor of Christ the Savior. / Therefore, you followed Peter with zeal / and served Paul well as a fellow laborer, / and you enlighten the world with your holy Gospel.

When you received the grace of the Spirit from on high, O Apostle, / you broke the snares of the philosophers and gathered all nations into your net, / bringing them to your Lord, O glorious Mark, / by the preaching of the divine Gospel.