St. Athanasius of Lubensk the Patriarch of Constantinople 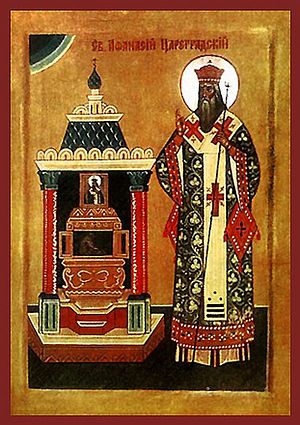 Saint Athanasius III Patelarios, Patriarch of Constantinople, Wonderworker of Lubensk, in the world Alexis, was born in 1560 on the island of Crete, into the pious Greek family Patelarios. Despite his education and position in society, Alexis was attracted by the life of Christian ascetics. After his father’s death, he became a novice in one of the monasteries of Thessalonica with the name Ananias. From there, he he later went to the monastery of Esphimenou on Mt. Athos, where he fulfilled his obedience in the trapeza (dining area).

From Athos he journeyed to the Palestinian monasteries, and he was tonsured with the name Athanasius. Upon his return to Thessalonica he was ordained presbyter and spread the Gospel of Christ among the Vlachs and the Moldovians, for whom he translated the PSALTER from the Greek. Sometimes, the saint went to Mt. Athos for solitude, and to ask God’s blessing on his pastoral work. The holiness of his life attracted many Christians who wished to see a true preacher of the Orthodox Faith.

By his remarkable abilities and spiritual gifts he attracted the attention of the Patriarch of Constantinople, Cyril I (Lukaris) (1621-1623). Summoning the ascetic, Patriarch Cyril appointed him a preacher of the Patriarchal throne. Soon Saint Athanasius was consecrated bishop and became Metropolitan of Thessalonica.

At this time Patriarch Cyril was slandered before the sultan and imprisoned on the island of Tenedos. Saint Athanasius assumed the Patriarchal throne on March 25, 1634, on the day of the Annunciation of the Most Holy Theotokos.

Patriarch Athanasius led an incessant struggle against heretics, Jesuits, and Moslems. After only forty days on the Patriarchal throne, he was deposed through the intrigues of the enemies of Orthodoxy, and Cyril I was returned.

The saint went to Athos, where for a certain time he pursued asceticism in solitude. Then he became Patriarch again, but was deposed after a year. After this, he returned to Thessalonica and renewed his connections with the Holy Mountain. In view of the intolerable persecution of Christians by the Moslems, Saint Athanasius was repeatedly (from 1633 to 1643) obliged to send petitions to the Russian tsar Michael (1613-1645) seeking alms for the hapless Church of Constantinople.

When living at Thessalonica became impossible for the saint, he was forced to journey to Moldavia under the protection of its sovereign, Basil Lukulos, and he settled there in the monastery of Saint Nicholas near Galats, but he longed for Mount Athos. He visited it often and hoped to finish his life there, but God ordained something else for him.

In 1652 after the death of Patriarch Cyril I, Saint Athanasius was returned to the patriarchal throne. He remained only fifteen days, since he was not acceptable to the Moslems and Catholics. During his final Patriarchal service he preached a sermon in which he denounced papal pretensions to universal jurisdiction over the whole Church.

Persecuted by the Moslems and Jesuits, physically weakened, he transferred the administration of the Church of Constantinople to Metropolitan Paisius of Laureia, and he withdrew to Moldavia, where he was appointed administrator of the monastery of Saint Nicholas at Galats.

Knowing the deep faith and responsiveness of the Russian nation, Saint Athanasius undertook a journey to Russia. In April 1653 he was met with great honor in Moscow by Patriarch Nikon (1652-1658) and Tsar Alexis Mikhailovich. Having received generous alms for the needs of the monastery, Patriarch Athanasius left for Galats in December 1653. On the way he fell ill and stayed at the Transfiguration Mgarsk monastery in the city of Lubno in February 1654.

Sensing his impending death, the saint wrote his last will, and he fell asleep in the Lord on April 5. Igumen Petronios and the brethren of the monastery buried the Patriarch. By Greek custom the saint was buried in a sitting position. On February 1, 1662 Saint Athanasius was glorified as a saint and his Feastday was designated as May 2, the Feast of Saint Athanasius the Great.

The relics of holy Patriarch Athansios, glorified by numerous miracles and signs, rest in the city of Kharkov, in the Annunciation cathedral church.