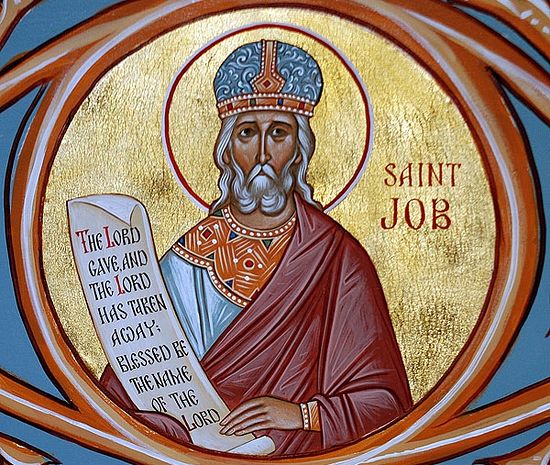 The righteous Job (whose name means “persecuted”), God’s faithful servant, was the perfect image of every virtue. The son of Zarah and Bossorha (Job 42), Job was a fifth-generation descendent of Abraham. He was a truthful, righteous, patient and pious man who abstained from every evil thing. Job was very rich and blessed by God in all things, as was no other son of Ausis (his country, which lay between Idoumea and Arabia). However, divine condescension permitted him to be tested.

Job lost his children, his wealth, his glory, and every consolation all at once. His entire body became a terrible wound covered with boils. Yet he remained steadfast and patient in the face of his misfortune for seven years, always giving thanks to God.

Later, God restored his former prosperity, and he had twice as much as before. Job lived for 170 years after his misfortune, completing his earthly life in 1350 B.C. at the age of 240. Some authorities say that Job’s afflictions lasted only one year, and that afterwards he lived for 140 years, reaching the age of 210.

Job’s explanations are among the most poetic writings in the Old Testament book which bears his name. It is one of the most edifying portions of Holy Scripture. Job teaches us that we must endure life’s adversities patiently and with trust in God. As Saint Anthony the Great (January 17) says, without temptations, it is impossible for the faithful to be saved.

The Orthodox Church reads the book of Job, the first of the seven wisdom books of the Old Testament, during Holy Week, drawing a parallel between Job and Christ as righteous men who suffered through no fault of their own. God allowed Satan to afflict Job so that his faithfulness would be proven. Christ, the only sinless one, suffered voluntarily for our sins. The Septuagint text of Job 42:17 says that Job “will rise again with those whom the Lord raises up.” This passage is read on Great and Holy Friday, when the composite Gospel at Vespers speaks of the tombs being opened at the moment the Savior died on the Cross, and the bodies of the saints were raised, and they appeared to many after Christ’s Resurrection (Mt.27:52)

As an indestructible pillar of courage, / you repulsed the attacks of Belial and remained unmoved in temptation. / Therefore, O wise Job, / the Church praises you as a model of endurance and an example of virtue; / and she is made radiant by your great deeds.

You were true and just, pious, blameless and holy, O glorious servant of God. / You enlightened the world by your perseverance, much-afflicted Job. / Therefore, we all honor and praise your divinely-wise memory.