Commemorated on October 28 and May 6 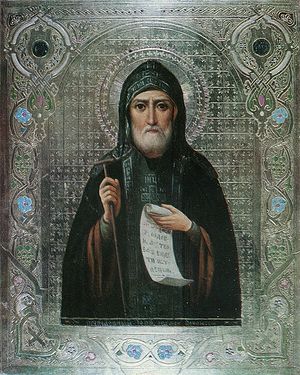 Saint Job, Abbot and Wonderworker of Pochaev (in the world named Ivan Zhelezo), was born around 1551 in Pokutia in Galicia. At age ten he came to the Transfiguration Ugornits monastery, and at age twelve he received monastic tonsure with the name Job. The venerable Job from his youth was known for his great piety and strict ascetic life, and he was accounted worthy of the priestly office.

Around the year 1580, at the request of the renowned champion of Orthodoxy Prince Constantine Ostrozhsky, Saint Job was appointed the head of the Exaltation of the Cross monastery near the city of Dubno, and for more than twenty years he governed the monastery amidst the growing persecution of Orthodoxy on the part of the Catholics and Uniates.

At the beginning of the seventeenth century, Saint Job withdrew to Pochaev hill and settled in a cave not far from the ancient Dormition monastery, famed for its wonderworking Pochaev Icon of the Mother of God (July 23). The holy hermit, beloved by the brethren of the monastery, was chosen as their Igumen. Saint Job zealously fulfilled his duty as head of the monastery, kind and gentle with the brethren, he did much of the work himself, planting trees in the garden, and strengthening the waterworks at the monastery.

Saint Job was an ardent defender of the Orthodox Faith against the persecution of the Catholics. Following the Union of Brest (1596), many Orthodox living in Poland were deprived of their rights, and attempts were made to force them to convert to Catholicism. Many Orthodox hierarchs became apostates to Uniatism, but Saint Job and others defended Orthodoxy by copying and disseminating Orthodox books. Prince Ostrozhsky was also responsible for the first printed edition of the Orthodox Bible (1581).

In taking an active part in the defense of Orthodoxy and the Russian people, Saint Job was present at the 1628 Kiev Council, convened against the Unia. After 1642, he accepted the great schema with the name John.

Sometimes he completely secluded himself within the cave for three days or even a whole week. The Jesus Prayer was an unceasing prayer in gentle heart. According to the testimony of his disciple Dositheus, and author of the Life of Saint Job, once while praying in his cave, the saint was illumined by a heavenly light. Saint Job reposed in the year 1651. He was more than 100 years old, and had directed the Pochaev monastery for more than fifty years.

Having acquired the patience of your Forefather, / and having resembled the Baptist in abstinence, / you shared the divine zeal of both / and were counted worthy to receive their names. / You were a fearless preacher of the True Faith; / in this way you brought a multitude of monastics to Christ. / You strengthened all people in Orthodoxy, / Job, our venerable father; / pray that our souls may be saved.

Podoben: “Today You have shown forth...” / You were a pillar of the True Faith; / a zealot of the commandments of the Gospel; / a denouncer of pride, / and a defender and teacher of the humble. / Therefore, those who honor you pray for the remission of their sins, / and that this, your holy habitation, be kept safe from all harm, / Job, our father, who resembled the long-suffering Patriarch of old.