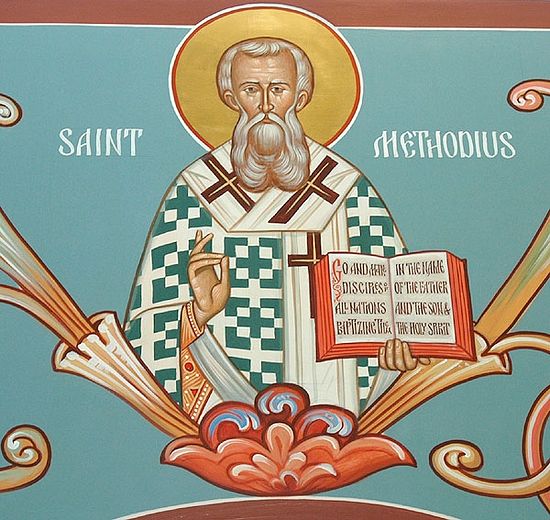 Saint Methodius, Equal of the Apostles, and Enlightener of the Slavs, came from an illustrious and pious family living in the Greek city of Thessalonica. Saint Methodius was the oldest of seven brothers, Saint Constantine [Cyril was his monastic name] was the youngest. At first Saint Methodius was in the military and was governor in one of the Slavic principalities dependent on the Byzantine Empire, probably Bulgaria, which made it possible for him to learn the Slavic language. After living there for about ten years, Saint Methodius later received monastic tonsure at one of the monasteries on Mount Olympus (Asia Minor).

Saint Constantine eventually joined his brother Saint Methodius on Olympus, spending his time in unceasing prayer and reading the works of the holy Fathers.

The emperor soon summoned both of the holy brothers from the monastery and sent them to preach the Gospel to the Khazars. Along the way they stayed in the city of Korsun, making preparations for their missionary activity. There the holy brothers miraculously discovered the relics of the hieromartyr Clement, Pope of Rome (November 25).

There in Korsun Saint Constantine found a Gospel and Psalter written in Russian letters [i.e. Slavonic], and a man speaking the Slavic tongue, and he learned from this man how to read and speak this language. After this, the holy brothers went to the Khazars, where they won a debate with Jews and Moslems by preaching the Gospel. On the way home, the brothers again visited Korsun, then returned to Constantinople with the relics of Saint Clement.

Saint Constantine remained in the capital, but Saint Methodius was made igumen of the small Polychronion monastery near Mount Olympus, where he lived a life of asceticism as before.

Soon messengers came to the emperor from the Moravian prince Rostislav, who was under pressure from German bishops, requesting him to send teachers to Moravia who could preach in the Slavic tongue. The emperor summoned Saint Constantine and said to him, “You must go there, but it would be better if no one knows about this.”

Saint Constantine prepared for the new task with fasting and prayer. With the help of his brother Saint Methodius and the disciples Gorazd, Clement, Sava, Naum and Angelyar, he devised a Slavonic alphabet and translated the books which were necessary for the celebration of the divine services: the Gospel, Epistles, Psalter, and collected services, into the Slavic tongue. This occurred in the year 863.

After completing the translation, the holy brothers went to Moravia, where they were received with great honor, and they began to teach the services in the Slavic language. This aroused the malice of the German bishops, who celebrated divine services in the Moravian churches in Latin. They rose up against the holy brothers, convinced that divine services must be done in one of three languages: Hebrew, Greek or Latin.

Saint Constantine said, “You only recognize three languages in which God may be glorified. But David sang, ‘Praise the Lord, all nations, praise the Lord all peoples (Ps 116/117:1).’ And the Gospel of Saint Matthew (28:18) says, ‘Go and teach all nations....’” The German bishops were humiliated, but they became bitter and complained to Rome.

At Rome Saint Constantine fell ill, and the Lord revealed to him his approaching death. He was tonsured into the monastic schema with the name of Cyril. On February 14, 869, fifty days after receiving the schema, Saint Cyril died at the age of forty-two.

Saint Cyril commanded his brother Saint Methodius to continue with their task of enlightening the Slavic peoples with the light of the true Faith. Saint Methodius entreated the Pope to send the body of his brother for burial in their native land, but the Pope ordered the relics of Saint Cyril to be placed in the church of Saint Clement, where miracles began to occur from them.

After the death of Saint Cyril, the Pope sent Saint Methodius to Pannonia, after consecrating him as Archbishop of Moravia and Pannonia, on the ancient throne of Saint Andronicus (July 30). In Pannonia Saint Methodius and his disciples continued to distribute services books written in the Slavonic language. This again aroused the wrath of the German bishops. They arrested and tried Saint Methodius, who was sent in chains to Swabia, where he endured many sufferings for two and a half years.

After being set free by order of Pope John VIII of Rome, and restored to his archdiocese, Saint Methodius continued to preach the Gospel among the Slavs. He baptized the Czech prince Borivoi and his wife Ludmilla (September 16), and also one of the Polish princes. The German bishops began to persecute the saint for a third time, because he did not accept the erroneous teaching about the procession of the Holy Spirit from both the Father and the Son. Saint Methodius was summoned to Rome, but he justified himself before the Pope, and preserved the Orthodox teaching in its purity, and was sent again to the capital of Moravia, Velehrad.

Here in the remaining years of his life Saint Methodius, assisted by two of his former pupils, translated the entire Old Testament into Slavonic, except for the Book of Maccabbees, and even the Nomocanon (Rule of the holy Fathers) and Paterikon (book of the holy Fathers).

Sensing the nearness of death, Saint Methodius designated one of his students, Gorazd, as a worthy successor to himself. The holy bishop predicted the day of his death and died on April 6, 885 when he was about sixty years old. The saint’s burial service was chanted in three languages, Slavonic, Greek, and Latin. He was buried in the cathedral church of Velehrad.

Divinely-wise Cyril and Methodius, / equals-to-the-apostles and teachers of the Slavs, / entreat the Master of all / to strengthen all nations in Orthodoxy and unity of mind, / to grant peace to the world and to save our souls.

Let us honor the sacred pair, who translated divine scripture / pouring forth a fountain of divine knowledge from which we still draw today. / Now as you stand before the throne of the Most-high / we call you blessed, Cyril and Methodius, / as you fervently pray for our souls.