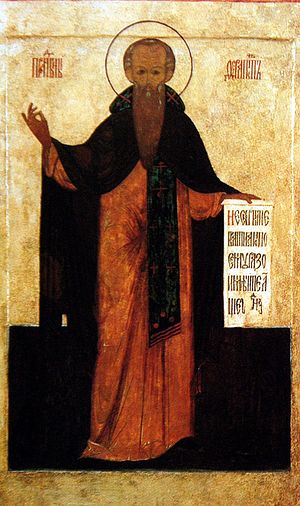 Saint Therapon of White Lake, Wonderworker of Luzhetsk, in the world Theodore, was born in the year 1337 at Volokolamsk into the noble Poskochin family. From his childhood, he was raised in faith and piety, which he displayed throughout his life as a holy ascetic.

At the age of forty he was tonsured a monk by the igumen of Moscow’s Simonov monastery, Saint Theodore, a nephew of Saint Sergius (November 28). As a monk in this monastery Therapon became close to Saint Cyril of White Lake (June 9). Together they passed through their ascetic struggles of prayer and fasting. They were under the spiritual guidance of Saint Sergius of Radonezh (September 25 and July 5), who visited the monastery to instruct the brethren. Saint Therapon went north, to the frontier of White Lake, on monastery matters. The harsh northern land attracted the ascetic, and he decided to remain there for his ascetic endeavors.

After returning with Saint Cyril, to whom the Mother of God had appeared, also ordering him to go to the north, Saint Therapon received the blessing of the igumen to go to White Lake. For a while the ascetics lived together in a cell that they had built, but later and by mutual consent, Saint Therapon moved to another place fifteen versts away from Cyril, between two lakes, Borodava and Pava.

Having cleared a small plot for a garden, and building a cell in the deep forest near a river, Saint Therapon continued his ascetic efforts as a hermit in silence. At first he endured much deprivation and tribulation in his solitude. More than once he was set upon by robbers, who tried to chase away or even kill the ascetic. In time monks began to gather to the saint, and the wilderness place was gradually transformed into a monastery, afterwards called the Theraponov.

A cenobitic monastic rule was introduced at the monastery, strictly observed by the monks. Saint Therapon declined to head the monastery out of humility, and instead entrusted the position of igumen to one of his disciples. The holy ascetic, endowed with the gift of counsel, turned to his friend, Saint Cyril of White Lake for spiritual guidance just as before. News about the ascetic deeds of the saint spread far beyond the White Lake frontier.

At the beginning of the fifteenth century, the lands on which the Saint Cyril and Saint Therapon monasteries were built, were part of the holdings of the Mozhaisk prince Andrew (1382-1432), son of Great Prince Demetrius Donskoy (1363-1389). In the year 1408 Prince Andrew Dimitrievich, learning of the high level of spiritual life of the White Lake ascetic, asked the monastic Elder Therapon to establish a monastery in the city of Mozhaisk.

It was difficult for the saint to leave his own monastery, where he had labored for more than ten years. Saint Therapon was met at Mozhaisk with great honor. Soon, not far from Mozhaisk, in the locality of Lushko, Saint Therapon founded his second monastery on a hilly part of the right bank of the Moscow River. Its chief temple was in honor of the Nativity of the Most Holy Theotokos, in memory of the White Lake monastery. Prince Andrew, esteeming the saint for his true humility, provided generous help in the construction and establishment of the monastery. With the blessing of Saint Photius, Metropolitan of Moscow (July 2 and May 27), the monastery was to be headed by an archimandrite, and Saint Therapon was elevated to the rank of archimandrite.

Saint Therapon dwelt at this new monastery for eighteen years. He reposed at an advanced age, on May 27, 1426. His body was buried at the north wall of the cathedral of the Nativity of the Most Holy Theotokos. Over his grave a church was built in honor of Saint John of the Ladder (March 30), and renamed in 1730 for Saint Therapon.

Veneration of the saint began soon after his death. In 1514, the incorrupt relics of the holy ascetic were uncovered and glorified by numerous miracles. After the Moscow Council of 1547 the canonization of Saint Therapon of Mozhaisk took place after the igumen of the Saint Therapon monastery brought to Metropolitan Macarius (1543-1564) a Life of the saint.

Among the numerous disciples and conversers of Saint Sergius of Radonezh, the Russian Church venerates the memory of Saint Therapon, who in following the counsel of his great teacher and guide, combined the ascetic feats of silence and solitude with active service to his neighbor and the spiritual enlightenment of his Fatherland.