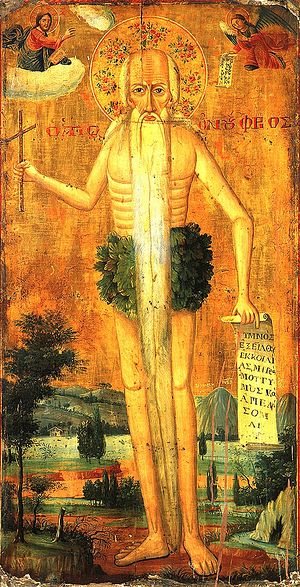 Saint Paphnutius, who led an ascetical life in the Thebaid desert in Egypt, has left us an account of Saint Onuphrius the Great and the Lives of other fourth century hermits: Timothy the Desert Dweller, the abbas Andrew, Charalampus, Theophilus, and others.

It occurred to Saint Paphnutius to go to the inner desert in order to see if there were a monk who labored for the Lord more than he did. He took a little bread and water and went into the most remote part of the desert. After four days he reached a cave and found in it the body of an Elder who had been dead for several years. Having buried the hermit, Saint Paphnutius went on farther. After several more days he found another cave, and from the marks in the sand he realized that the cave was inhabited. At sundown he saw a herd of buffalo and walking among them a man. This man was naked, but was covered with long hair as if with clothing. This was Abba Timothy the Desert-Dweller.

Seeing a fellow man, Abba Timothy thought that he was seeing an apparition, and he began to pray. Saint Paphnutius finally convinced the hermit that he was actually a living man and a fellow Christian. Abba Timothy prepared food and water for him. He related that he had been living in the desert for thirty years, and that Saint Paphnutius was the first man he had seen. In his youth, Timothy had lived in a cenobitic monastery, but he wanted to live alone. Abba Timothy left his monastery and went to live near a city, sustaining himself by the work of his own hands (he was a weaver). Once a woman came to him with an order and he fell into sin with her. Having come to his senses, the fallen monk went far into the desert, where he patiently endured tribulation and sickness. When he was at the point of dying from hunger, he received healing in a miraculous manner.

From that time Abba Timothy had lived peacefully in complete solitude, eating dates from the trees, and quenching his thirst with water from a spring. Saint Paphnutius besought the Elder that he might remain with him in the wilderness. But he was told that he would be unable to bear the demonic temptations which beset desert-dwellers. Instead, he supplied him with dates and water, and blessed him to go on his way.

Having rested at a desert monastery, Saint Paphnutius undertook a second journey into the innermost desert, hoping to find another holy ascetic who would profit his soul. He went on for seventeen days, until his supply of bread and water was exhausted. Saint Paphnutius collapsed twice from weakness, and an angel strengthened him.

On the seventeenth day Saint Paphnutius reached a hilly place and sat down to rest. Here he caught sight of a man approaching him, who was covered from head to foot with white hair and girded his loins with leaves of desert plants. The sight of the Elder frightened Abba Paphnutius, and he jumped up and fled up the hill. The Elder sat down at the foot of the hill. Lifting his head, he saw Saint Paphnutius, and called him to come down. This was the great desert-dweller, Abba Onuphrius. At the request of Saint Paphnutius, he told him about himself.

Saint Onuphrius had lived in complete isolation in the wilds of the wilderness for sixty years. In his youth he had been raised at the Eratus monastery near the city of Hermopolis. Having learned from the holy Fathers about the hardships and lofty life of the desert-dwellers, to whom the Lord sent help through His angels, Saint Onuphrius longed to imitate their exploits. He secretly left the monastery one night and saw a brilliant ray of light before him. Saint Onuphrius became frightened and decided to go back, but the voice of his Guardian Angel told him to go into the desert to serve the Lord.

After walking six or seven miles, he saw a cave. At that moment the ray of light vanished. In the cave was an old man. Saint Onuphrius stayed with him to learn of his manner of life and his struggle with demonic temptations. When the Elder was convinced that Saint Onuphrius had been enlightened somewhat, he then led him to another cave and left him there alone to struggle for the Lord. The Elder visited him once a year, until he fell asleep in the Lord.

At the request of Saint Paphnutius, Abba Onuphrius told him of his labors and ascetic feats, and of how the Lord had cared for him. Near the cave where he lived was a date-palm tree and a spring of pure water issued forth. Twelve different branches of the palm tree bore fruit each month in succession, and so the monk endured neither hunger nor thirst. The shade of the palm tree sheltered him from the noonday heat. An angel brought Holy Communion to the saint each Saturday and Sunday, and to the other desert-dwellers as well.

The monks conversed until evening, when Abba Paphnutius noticed a loaf of white bread lying between them, and also a vessel of water. After eating, he Elders spent the night in prayer. After the singing of the morning hymns, Saint Paphnutius saw that the face of the venerable Onuphrius had become transformed, and that frightened him. Saint Onuphrius said, “God, Who is Merciful to all, has sent you to me so that you might bury my body. Today I shall finish my earthly course and depart to my Christ, to live forever in eternal rest.” Saint Onuphrius then asked Abba Paphnutius to remember him to all the brethren, and to all Christians.

Saint Paphnutius wanted to remain there after the death of Abba Onuphrius. However, the holy ascetic told him that it was not God’s will for him to stay there, he was to return to his own monastery instead and tell everyone about the virtuous lives of the desert-dwellers. Having then blessed Abba Paphnutius and bid him farewell, Saint Onuphrius prayed with tears and sighs, and then he lay down upon the earth, uttering his final words, “Into Thy hands, my God, I commend my spirit,” and died.

Saint Paphnutius wept and tore off a portion of his garment, and with it covered the body of the great ascetic. He placed it in the crevice of a large rock, which was hollow like a grave, and covered it over with a multitude of small stones. Then he began to pray that the Lord would permit him to remain in that place until the end of his life. Suddenly, the cave fell in, the palm tree withered, and the spring of water dried up. Realising that he had not been given a blessing to remain, Saint Paphnutius set out on his return journey.

After four days Abba Paphnutius reached a cave, where he met an ascetic, who had lived in the desert for more than 60 years. Except for the two other Elders, with whom he labored, this monk had seen no one in all that time. Each week these three had gone on their solitary paths into the wilderness, and on Saturday and Sunday they gathered for psalmody, and ate the bread which an angel brought them. Since it was Saturday, they had gathered together. After eating the bread provided by the angel, they spent the whole night at prayer. As he was leaving, Saint Paphnutius asked the names of the Elders, but they said, “God, Who knows everything, also knows our names. Remember us, that we may see one another in God’s heavenly habitations.”

Continuing on his way, Saint Paphnutius came upon an oasis which impressed him with its beauty and abundance of fruit-bearing trees. Four youths inhabiting this place came to him from out of the wilderness. The youths told Abba Paphnutius that in their childhood they had lived in the city of Oxyrhynchus (Upper Thebaid) and they had studied together. They had burned with the desire to devote their lives to God. Making their plans to go off into the desert, the young men left the city and after several days’ journey, they reached this place.

A man radiant with heavenly glory met them and led them to a desert Elder. “We have lived here six years already,” said the youths. “Our Elder dwelt here one year and then he died. Now we live here alone, we eat the fruit of the trees, and we have water from a spring.” The youths gave him their names, they were Saints John, Andrew, Heraklemon and Theophilus (Dec. 2).

The youths struggled separately the whole week long, but on Saturday and Sunday they gathered at the oasis and offered up common prayer. On these days an angel would appear and commune them with the Holy Mysteries. This time however, for Abba Paphnutius’ sake, they did not go off into the desert, but spent the whole week together at prayer. On the following Saturday and Sunday Saint Paphnutius together with the youths was granted to receive the Holy Mysteries from the hands of the angel and to hear these words, “Receive the Imperishable Food, unending bliss and life eternal, the Body and Blood of the Lord Jesus Christ, our God.”

Saint Paphnutius made bold to ask the angel for permission to remain in the desert to the end of his days. The angel replied that God had decreed another path for him. He was to return to Egypt and tell the Christians of the life of the desert-dwellers.

Having bid farewell to the youths, Saint Paphnutius reached the edge of the wilderness after a three day journey. Here he found a small skete, and the brethren received him with love. Abba Paphnutius related everything that he had learned about the holy Fathers whom he had encountered in the desert. The brethren wrote a detailed account of what Saint Paphnutius said, and deposited it in the church, where all who wished to do so could read it. Saint Paphnutius gave thanks to God, Who had granted him to learn about the exalted lives of the hermits of the Thebaid, and he returned to his own monastery.

In the flesh you lived the life of the angels, / You were citizens of the desert and treasuries of grace, / O Onuphrius, adornment of Egypt, / And Peter the light of Athos. / Therefore we honor your struggles as we sing to you: / Glory to him who has strengthened you! / Glory to him who granted you a crown! / Glory to him who through you grants healing to all!

You appeared as a bright star to the hermits of the desert, / A light shining in the darkness of solitude, O holy Father Onuphrius, / Therefore ceaselessly intercede for us all.

By your achievements in the wilderness you became like the Bodiless Powers, / Godly Onuphrius, and righteous Peter adornment of Athos. / The heavenly-minded pair who sing in one voice: “Alleluia”!