Venerable Arsenius the Abbot of Konevits 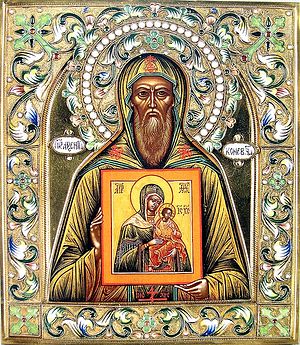 Saint Arsenius of Konevits was a native of Novgorod, a coppersmith by trade. The saint accepted tonsure at the Lisich monastery near Novgorod, where he spent eleven years. He went to Mount Athos in 1373, and there he spent three years, dwelling in prayer and making copper vessels for the brethren.

In the year 1393, Saint Arsenius returned to Russia and brought with him an icon of the Mother of God, which was later called the Konevits Icon. Saint Arsenius went with this icon to the island of Konevets on Lake Ladoga, where he spent five years in solitude.

In 1398, with the blessing of Archbishop John of Novgorod, Saint Arsenius laid the foundations of a cenobitic monastery dedicated to the Nativity of the Most Holy Theotokos. He visited Athos a second time, and asked the holy Fathers for their prayers and a blessing for his monastery.