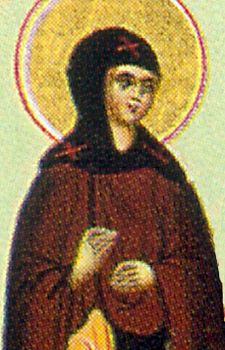 Saint Martha lived in Cilicia of Asia Minor during the fourth and fifth centuries, and came from a poor family. She and her husband Sisotion were the parents of Saint Simeon the Stylite.

At the age of eighteen, Simeon received the monastic tonsure without his parents’ knowledge. Many years later, Martha came to the saint’s pillar in order to see him. Simeon sent word to her not to come, for if they were worthy, they would see each other in the life to come. Martha insisted on seeing him, and he had someone tell her to wait for a while in silence. Saint Martha agreed to this, and waited at the foot of the hill where her son’s pillar stood. There she departed to the Lord.

When he heard that his mother had died, Saint Simeon ordered that her body be brought to the foot of his pillar. He prayed over his mother’s body for some time shedding many tears, and witnesses said that a smile appeared on Saint Martha’s face.