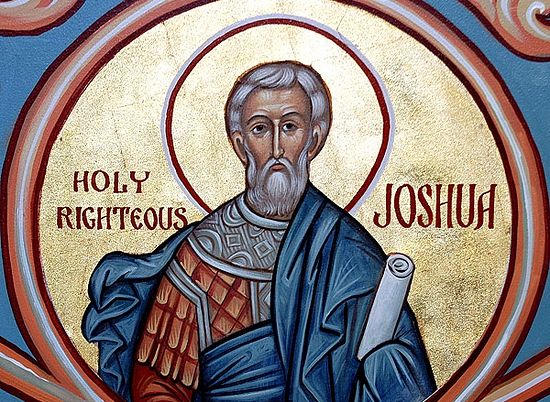 Saint Joshua (Jesus), the son of Navi, was leader of the Israelites after the death of the Prophet Moses. He was born in Egypt around 1654 B.C. and succeeded Moses when he was eighty-five. He ruled the Israelites for twenty-five years.

Joshua conquered the Promised Land, and led the Hebrew nation into it. The Lord worked a great miracle through Joshua. He stopped the Jordan from flowing, allowing the Israelites to cross over on foot as if on dry land (Joshua 3). Saint Michael, the Leader of the Heavenly Hosts, appeared to Joshua (Joshua 5:13-15).

The walls of Jericho fell down by themselves after the Ark of the Covenant was carried around the city for seven days (Joshua 6:20). Finally, during a battle with the enemy, Joshua, by God’s will, halted the motion of the sun (Joshua 10:13) and prolonged the day until victory was won.

After the end of the war, Joshua divided the Promised Land among the Twelve Tribes of Israel. He died at 110 years of age (1544 B.C.), commanding the nation to preserve the Law of Moses. All these events are recounted in the Book of Joshua, the sixth book of the Old Testament.