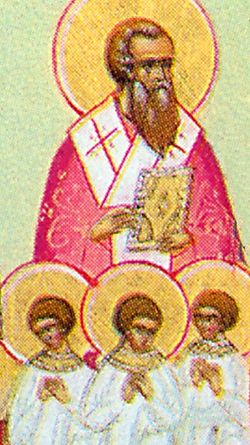 The Hieromartyr Babylas and with him the three youths Urban, Prilidian, Epolonius and their mother Christodoula died as martyrs under the emperor Decius (249-251). During his stay in their city of Antioch, the emperor arranged for a large festival in honor of the pagan gods.

At the same time, Babylas, the holy and God-fearing Bishop of Antioch, was serving the Divine Liturgy in church. He prayed for his flock and taught them to endure all tribulations for Christ with courage. The idolater Decius, curious to witness the Divine Mysteries, decided to enter the church.

News of this reached the bishop, so he went out to meet Decius and blocked the path to the church, for he was unwilling to permit impiety in the temple of God. When the emperor approached the church doors, Saint Babylas refused to let him enter, so the emperor had to abandon his intention. He wanted to take revenge on the saint right away, but when he saw the large throng of Christians, he feared they might riot.

The next day the angry emperor ordered that the church be set on fire, and for Bishop Babylas to be brought before him. When asked why he had insulted the imperial dignity by not allowing the emperor to enter the church, the holy bishop answered, “Anyone who would rise up against God and want to desecrate His sanctuary, is not worthy of respect, but has become the enemy of the Lord.”

Decius declared that the holy bishop must worship the idols in order to make up for his lack of respect for the emperor, or else face execution. After convincing himself that the martyr would remain steadfast in his faith, he commanded the military commander Victorinus to put him in heavy chains and lead him through the city in disgrace. The holy martyr replied, “Emperor, these chains are as venerable for me as your imperial crown is for you. For me, suffering for Christ is as desirable as the imperial power is for you. Death for the Immortal King is as precious to me as your life is to you.”

At the trial with Bishop Babylas were three young brothers, who did not forsake him even in this most difficult moment. Seeing them, the emperor asked, “Who are these children? “

“These are my spiritual children,” the saint replied, “and I have raised them in piety, I have given them an education, cultivated them with guidance, and here before you in a small body are these great young men and perfect Christians. Test them and see.”

The emperor tried in all sorts of ways to entice the youths and their mother Christodoula to renounce Christ, but in vain. Then, in a rage, he ordered each of them to be whipped with a number of blows corresponding to their age. The first received twelve blows, the second, ten, and the third, seven. Dismissing the mother and children, the torturer again summoned the bishop, telling him that the children had renounced Christ. He did not believe the lie, however.

Then he commanded all the martyrs be tied to a tree and burned with fire. Seeing the stoic bravery of the saints, the emperor finally condemned them to be beheaded with the sword.

By sharing in the ways of the Apostles, / you became a successor to their throne. / Through the practice of virtue, / you found the way to divine contemplation, O inspired one of God; / by teaching the word of truth without error, / you defended the Faith, even to the shedding of your blood. / Hieromartyr Babylas, entreat Christ God to save our souls.

You guarded the mighty works of faith in your heart, / therefore, you did not fear the tyrant; / preserve us as well, Hieromartyr Babylas, good servant of Christ.