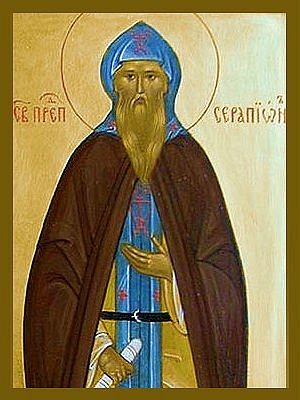 Saint Serapion of Pskov was born at Yuriev (now Tartu), which then was under the rule of Germans, who sought to stamp out Orthodoxy. His parents were parishioners of a Russian church in the name of Saint Nicholas.

Saint Serapion was well versed in the Holy Scripture, and more than once he entered into the defense of Orthodoxy. When they wanted to convert him by force to the foreign faith, he departed to the Tolvsk wilderness, not far from Pskov, where the Pskov ascetic monk Euphrosynus (May 15) began his prayerful work.

Under his nurturing, Saint Serapion began to acquire the wisdom of wilderness life. But soon he happened to undergo temptations. Without a blessing, he wanted to leave his guide and to live an ascetic life in complete solitude. But the Lord brought the inexperienced novice to his senses: after he seriously hurt his leg, he repented of his self-will and disobedience and returned to the Elder.

After he received the Great Schema, he dwelt constantly with Saint Euphrosynus for 55 years, strictly keeping the vow of silence. Brethren began gradually to gather around Saint Euphrosynus, for which the Elder built a temple in the name of the Three Hierarchs and gave a skete rule.

Saint Serapion zealously fulfilled everything commanded of him and was a role model for the monks. The monk so strictly fulfilled the monastic vow of uncovetousness, that a copyist of his life called him “an unburied corpse.” He bore every insult with extraordinary humility, always blaming himself alone, and he himself asked forgiveness of his insulter. The monk deeply sensed the power of communal prayers and he said that “the order of the twelve Psalms” sung alone in the cell cannot equal one “Lord, have mercy” sung in church.

Saint Serapion died on September 8, 1480, on the Feast of the Nativity of the Most Holy Theotokos. Since the day of repose of Saint Serapion coincides with one of the twelve Great Feasts, his commemoration is on September 7. A Troparion and Kontakion were composed for the saint.

Saint Euphrosynus himself committed the body of his disciple to the earth. By his fervent deeds he had transformed himself into mere “bones, covered by skin.” Saint Serapion was not separated from his spiritual Father even after death: their holy relics were placed beside each other. A common service was composed to Saints Euphrosynus and Serapion (15 May), wherein Saint Serapion is glorified as the first co-ascetic, “companion and friend” of Saint Euphrosynus.