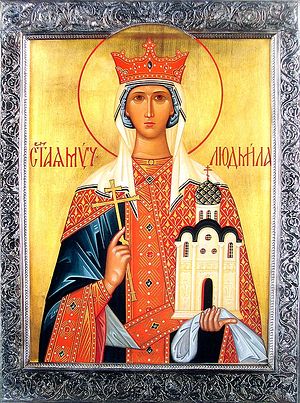 The Holy Martyr Ludmilla, a Czech (Bohemian) princess, was married to the Czech prince Borivoy. Both spouses received holy Baptism from Saint Methodius, Archbishop of Moravia and Enlightener of the Slavs (Comm. 11 May).

As Christians, they showed concern for the enlightening of their subjects with the light of the true Faith, they built churches and invited priests to celebrate the divine services. Prince Borivoy died early at age 36. Saint Ludmilla, as a widow, led an austere, pious life and continued to be concerned for the Church during the reign of her son Bratislav, which lasted for 33 years.

Bratislav was married to Dragomira, with whom he had a son, Vyacheslav. After the death of Bratislav, eighteen-year-old Vyacheslav came on the throne. Taking advantage of the inexperience and youth of her son, Dragomira began to introduce pagan manners and customs in the country.

Saint Ludmilla, of course, opposed this. Dragomira came to hate her mother-in-law and tried to destroy her. When Saint Ludmilla moved away to the city of Techin, Dragomira sent two boyars in secret to murder her. Saint Ludmilla was praying at the time, and the two assassins entered the house and carried out Dragomira’s orders.

The relics of the holy Martyr Ludmilla was buried in Techin in the city wall. Numerous healings occurred at her grave. Prince Vyacheslav transferred the body of Saint Ludmilla to the city of Prague and placed it in the church of Saint George.