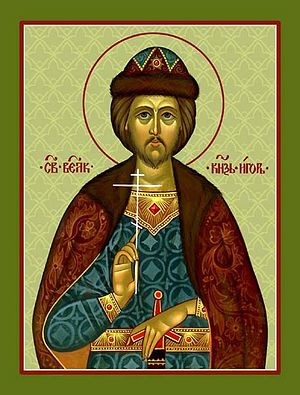 The Holy Prince Igor of Chernigov: The mid-twelfth century was a grievous time of incessant internecine strife over the Kiev principality between two princely factions: the Olegovichi and the Mstislavichi. They were all close relatives, they were all great-grandsons of Yaroslav the Wise. The Mstislavichi were called after their father, Saint Mstislav the Great (April 15), son of Vladimir Monomakh (from whence their other name: “Monomashichi”). The Olegovichi were called after the name of Oleg Sviatoslavich (+ 1115), known as “Gorislavich” because of his bitter [“gore”] fate. Oleg Gorislavich was the son of the Kievan prince Sviatoslav (+ 1076), who participated in the Transfer of the Relics of the holy Passion-Bearers Boris and Gleb in the year 1072 (May 2). Sviatoslav was the owner of two of the most remarkable theological collections of this time -- the “Sviatoslav Izbornik [selections from the holy Fathers] of 1073” and the “Izbornik of 1076.”

In certain old Mesyateslovs [Menaia], Prince Sviatoslav himself was esteemed as a saint of God, but particularly famed were his two grandsons: Saint Nicholas Sviatosha (October 14), and Nicholas’s first cousin, the holy Martyr Prince Igor Olegovich, the son of Oleg Gorislavich.

Saint Nicholas Sviatosha and Saint Igor Olegovich represent two different paths of Christian sanctity in ancient Rus. Saint Nicholas forsook the world and his princely duties to become a simple monk. He died in peace, after nearly forty years at the monastery. Saint Igor, involved in the struggle for the Kiev principality by God’s will, would blot out the sin of princely strife by his own martyrdom.

In the year 1138 the Great-principality of Kiev was assumed by Igor’s elder brother, Vsevolod Olegovich (great-grandfather of Saint Michael of Chernigov). Although his rule lasted only a few years and was filled with constant wars, Prince Vsevolod considered Kiev as his own dominion to bequeath [a view partly in conflict with the complex “appanage” system, rotating princes on the basis of seniority], and he decided to bequeath it as an inheritance to his brother Igor. For this he cited the example of Prince Vladimir Monomakh and said, almost as if intentionally provoking the Monomashichei: “Vladimir appointed Mstislav, his son, to follow after him in Kiev, and Mstislav designated his brother Yaropolk. ‘And herewith I declare that if God should take me, I give Kiev over to my brother Igor.’”

The haughty words of Vsevolod, whom the Kievans did not love, became a pretext for inciting enmity against his brother Igor and all the Olegovichi. “We do not want him to inherit,” resolved the Kievan council. The ill-will and arrogance of the prince provoked the ill-will and arrogance of the Kievans. Saint Igor, dragged into the very center of events against his will, became an innocent victim of the growing hatred.

On August 1, 1146 Prince Vsevolod died, and the Kievans kissed the cross, accepting Igor as their new prince. Igor kissed the cross and promised he would rule the people of Kiev justly and defend them. But the Kievan nobles violated their oath of fidelity when they kissed the cross, and immediately invited the Mstislavichi to Kiev with their forces. Beneath Kiev a battle raged between the forces of Prince Igor and those of Izyaslav Mstislavich. Once again breaking their oath, the Kievan forces went to Izyaslav’s side during the battle. For four days Igor Olegovich hid himself in the marshes about Kiev. Then they took him captive, and took him to Kiev and put him in the “blockhouse.” This was on August 13. His princely rule lasted only two weeks.

In order to free a prisoner from the “blockhouse,” a dank log house without windows or doors, it was necessary to “chop” him out of there. The much-suffering Igor fell grievously ill, and they thought that he would die. Under these conditions the enemies of the prince decided “to chop him out” of prison and have him tonsured a schemamonk at the Theodorov monastery. With the help of God, the prince recovered his health. As a monk at the monastery, he spent his time weeping and praying.

The struggle for Kiev continued. Incited by pride and blind hatred, neither side wanted to give in. Determined to wipe out the line of the Olegovichi, and all its princes, the Kievan council in the following year decided to kill the prince-monk.

The Metropolitan and the clergy tried to reason with them and stop them. The prince ruling at Kiev, Izyaslav Mstislavich, and in particular his brother Vladimir, tried to avert this senseless bloodshed, and to save the holy martyr, but they themselves were in danger from the vicious mob.

The mob rushed into church during the Holy Liturgy and seized Igor, who was praying before the icon of the Mother of God, and they dragged him out to kill him. Prince Vladimir halted the mob at the gates of the monastery. Igor said to him: “Brother, will you forsake me?” Vladimir jumped down from his horse, wanting to help, and covered him with his princely cloak while saying to the Kievan people: “Brethren, do not commit murder!” According to the Chronicle, “Vladimir led Igor to his mother’s palace, and they rushed at Vladimir.”

Vladimir succeeded in pushing Igor into the palace and locking the gates. But the people broke down the gates, and seeing Igor “in the lofts,” they dragged the holy martyr down and murdered him on the stairway. The vicious mob was so intense, that they subjected the dead body of the sufferer to further beatings and abuse. Then they dragged him by his feet to the Desyatina (Tithe) church. They threw him on a cart, and then “hung him up in the marketplace.”

Thus did the holy martyr surrender his soul to the Lord, “and he put off the perishable robe of mankind, and was clothed in the imperishable and much-suffering robe of Christ.” When on the evening of the same day the body of Saint Igor was transferred to the church of Saint Michael, “God manifested a great sign, and the candles around him lit by themselves.” On the second morning the holy sufferer was buried in the monastery of Saint Simeon, on the outskirts of Kiev.

In the year 1150, Prince Sviatoslav Olegovich of Chernigov transferred the relics of his brother, Saint Igor, to Chernigov and put them in the cathedral of the Savior. The wonderworking Igorov icon of the Mother of God, before which the martyr prayed before his murder, is in the Dormition church of the Kiev Caves Lavra (the icon is commemorated on June 5).