Apostle Ananias of the Seventy 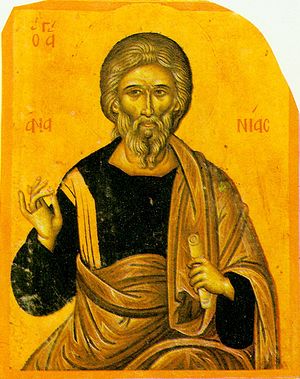 The Holy Apostle Ananias of the Seventy (October 1), was the first Bishop of Damascus. The Lord ordered him to restore the sight of Saul, the former persecutor of Christians, then baptize him (Acts 9:10-19, 22:12). Saul became the great preacher and Apostle Paul. Saint Ananias boldly and openly confessed Christianity before the Jews and the pagans, despite the danger.

From Damascus he went to preach at Eleutheropolis, where he healed many of their infirmities. Lucian, the prefect of the city, tried to persuade the holy one to offer sacrifice to idols. Because of Ananias’ staunch and solid confession of Christ, Lucian ordered that he be tortured. Harsh torments did not sway the witness of Truth. Then the torturers led him out beyond the city, where they stoned him. The saint prayed for those who put him to death. His relics were later transferred to Constantinople.