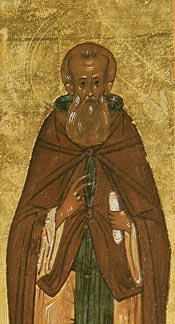 Saint Sava of Vishera was the son of the noble, John Borozda, of Kashin. From childhood, the monk was noted for his piety. He initially lived the ascetic life at the Tver Savvino wilderness monastery, where the brethren chose him to be the abbot.

Shunning honors, Saint Sava went to Mt. Athos, where he worked on copying service books. Upon his return from Athos, he selected a solitary place seven versts from Novgorod on the banks of the River Vishera for his ascetic efforts.

Here, with the blessing of Archbishop Simon of Novogorod, the monk organized a small monastery in honor of the Ascension of the Lord in 1418. Saint Sava set up a pillar nearby the monastery and lived as a stylite. He died in 1461 at the age of 80. He appointed as his successor his disciple Andrew, who was known for his strict and ascetic life.

The local commemoration was established under Archbishop Jonah of Novgorod (+ 1470), in connection with the healing of the igumen of the Sava-Vishera monastery. Archbishop Jonah ordered an icon of the monk be painted and a Canon composed. The general church glorification of Saint Sava took place at the Moscow Council of 1549. The service to him was composed by Hieromonk Pachomius of Serbia.