Icon of the Mother of God of Pskov “the Protection” 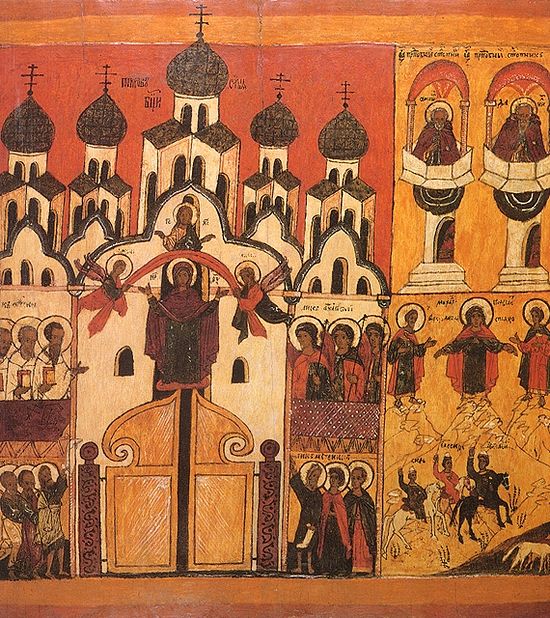 The Feast of the Pskov-Protection Icon of the Most Holy Theotokos was established in memory of the miraculous deliverance of Pskov from the invading troops of the Polish king Stephen Bathory in 1581. During the siege, they carried forth the wonderworking Dormition Icon of the Mother of God in procession from the monastery.

The Most Holy Virgin appeared to the Elder Dorotheus with various Russian Saints: the holy Great Prince Vladimir and the Pskov Princes Vsevolod-Gabriel and Dovmont-Timothy, Saint Anthony of Kiev Caves, Cornelius of Pskov, Euphrosynus of Spaso-Elazar and Sava of Krypetsk, Blessed Nicholas of Pskov and Saint Niphon, Archbishop of Novgorod, the organizer of the Pskov Spaso-Mirozh monastery.

Proceeding from the Pechor side from the Spaso-Mirozhsk monastery across the River Velika, the Mother of God with the Saints entered the church of the Protection monastery. The Saints besought the All-Pure Virgin to have pity on the sinful citizens of Pskov and save the city “from the imposition of woes.” The Most Holy Theotokos, having promised the city Her mercy, gave orders to set up the Pechersk icon at the place of Her appearance.

During the battle the Polish tried to breach the fortress wall, but through the intercession of the Mother of God and the Saints, they were not able to break through into the city. After their deliverance from the enemy, the grateful people of Pskov built a church in honor of the Nativity of the Most Holy Theotokos.