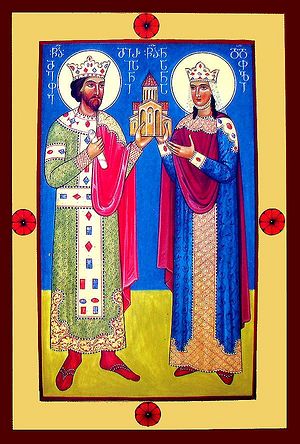 During the reign of King Aderki of Kartli, the Jewish diaspora in Mtskheta learned that a wondrous Child had been born in Jerusalem. Then, thirty years later, a man came from Jerusalem to deliver this message: “The youth has grown up. He calls Himself the Son of God and preaches to us the New Covenant. We have sent envoys to every Jewish diaspora to urge the scholars of the religion to come to Jerusalem and judge what measures should be taken in regard to this matter.”

In response to the envoy’s request and at the recommendation of the Jewish Sanhedrin, Elioz of Mtskheta and Longinoz of Karsani were chosen to journey to Jerusalem. Elioz of Mtskheta was born to a pious family, and as his mother prepared him for the journey, she tearfully begged him not to take any part in the spilling of the blood of the Messiah.

When the Roman soldiers were nailing our Savior to the Cross on Golgotha, Elioz’s mother miraculously heard each strike of the hammer. She cried out in fear, “Farewell majesty of the Jews! For inasmuch as you have killed your Savior and Redeemer, henceforth you have become your own enemies!” With this she breathed her last.

After the soldiers had cast lots for the Robe of our Lord, it was acquired by Elioz and Longinoz, and with great honor they carried it back with them to Mtskheta. Upon their arrival, Elioz met his sister Sidonia, who took from him the Sacred Robe. With much grief she listened to the story of our Savior’s Crucifixion, clutched the Robe to her breast, and immediately gave up her spirit. 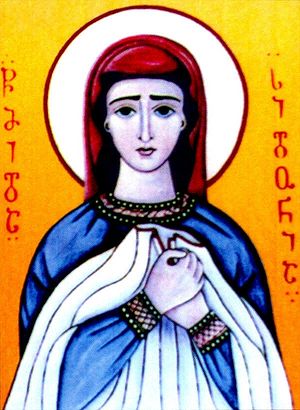 St. Sidonia
Many miracles were worked by the Robe, and news of this flashed like lightning throughout Mtskheta. King Aderki had a great desire to possess the Robe but, frightened by the miracles, he did not attempt to free it from Sidonia’s embrace. Elioz was obliged to bury his sister and the Precious Robe together. A cypress tree grew up on Sidonia’s grave. When the disciples of Christ cast lots after Pentecost, the lot for evangelizing Georgia fell to the Most Holy Theotokos. But Christ revealed to His Mother that it was not His will for her to preach there. “You have been entrusted to protect the Georgian nation,” He said, “but the role of evangelizing that land belongs to My disciple Andrew the First-called. Send him with an image of your face “Not-Made-By-Hands” to protect the Georgian people to the end of the ages!”

According to the will of God and the blessing of the Theotokos, Saint Andrew the First-called set off for Georgia to preach the Christian Faith. He entered Georgia from the southwest, in the region of Atchara, and subsequently preached in every region of the nation. He established a hierarchy for the Georgian Church and then returned to Jerusalem for Pascha. When he visited Georgia for the second time, the Apostle Andrew was accompanied by the Apostles Matthias and Simon the Canaanite.

Years passed and, under threat from Persian fire-worshippers and other pagan communities, the memory of Christ faded from the minds of the Georgian people.

Then, at the beginning of the 4th century, according to God’s will and the blessing of the Most Holy Theotokos, the holy virgin Nino arrived in Kartli to preach the Christian Faith. She settled in the outskirts of Mtskheta, in the bramble bushes of the king’s garden. Saint Nino inquired as to the whereabouts of our Lord’s Robe, but no one could remember where it had been preserved. In her quest for the Precious Robe, she became acquainted with Elioz’s descendants, the Jewish priest Abiatar and his daughter, Sidonia. Saint Nino converted them to Christianity.

Saint Nino was blessed by God with the gift of healing. She healed the afflicted through the name of our crucified Savior and through the grace of the cross formed from grapevines by the Theotokos and bound with strands of Saint Nino’s hair.

At that time King Mirian ruled Kartli. Following in the footsteps of his ancestors, he worshiped the idol Armazi, but in the depth of his heart he was drawn to the Faith that the holy virgin was preaching. Mirian’s wife, Queen Nana, was the daughter of a famous military leader of Pontus. Thus, the king had received some prior knowledge of the Faith of the Greeks.

Once Queen Nana fell deeply ill, and only through the prayers of Saint Nino was she spared from death. After this miraculous healing, King Mirian became intrigued by the Faith that Saint Nino was preaching, and he began asking the newly enlightened Abiatar about the Holy Scriptures.

Once, while he was hunting on Mt. Tkhoti near Mtskheta, King Mirian was suddenly gripped by an evil spirit, and he burned with a desire to destroy the Christian people of his land and—above all others— the virgin Nino. But suddenly the sun was eclipsed, and the king was surrounded by darkness. The frightened Mirian prayed to the pagan gods to save him from this terror, but his prayers went unanswered. Then, in utter despair, he began to pray to the Crucified God-man and a miracle occurred: the darkness scattered and the sun shone as before. Raising his hands to the east, Mirian cried out, “Truly Thou art the God preached by Nino, God of gods and King of kings!”

Having returned to the capital, King Mirian went immediately to the bramble bushes where Saint Nino dwelt. He greeted her with great honor and spent several hours seeking her counsel. Upon her recommendation, he sent messengers to Emperor Constantine in Byzantium, requesting that he send priests to baptize the people of Kartli and architects to build churches.

This happened on June 24 of the year 324, which was a Saturday. King Mirian began to construct a church so that the priests arriving from Constantinople would have a place to serve. Seven columns to support the church were formed from the wood of a cypress tree that had grown in the king’s garden. Six of the columns were erected without a problem, but the seventh could not be moved from the place where it had been carved. Saint Nino and her disciples prayed through the night, and at dawn they watched as a youth, encompassed by a brilliant light, descended from the heavens and raised the column. The miraculous column began to shine and stopped in mid-air at a height of twelve cubits.

Sweet-smelling myrrh began to flow from under the Holy Pillar’s foundations, and the entire population of Mtskheta flocked to that place to receive its blessing. Approaching the Life-giving Pillar, the sick were healed, the blind received sight, and the paralyzed began to walk.

By that time a certain Bishop John and his suite had arrived from Constantinople. Saint Constantine the Great sent a cross, an icon of the Savior, a fragment from the Life-giving Cross of our Lord (from the place where His feet lay), and a nail from His Crucifixion as gifts to the newly enlightened King Mirian and his people.

At the confluence of the Mtkvari and Aragvi Rivers in Mtskheta, the king and queen, the royal court, and all the people of Kartli were baptized into the Christian Faith. After the glorious baptism, Bishop John and his retinue from Constantinople set off toward southern Georgia, for the village of Erusheti. There they built churches and presented the Christian community with the nail from our Lord’s Crucifixion. Soon after, they began to construct Manglisi Church and placed the fragment from the Life-giving Cross inside.

King Mirian wanted to keep some of the newly obtained sacred objects in the capital city, but St.Nino informed him that one of the holiest objects, the Robe of our Savior, was already located in Mtskheta. The king summoned the priest Abiatar and inquired about the Robe, then rejoiced greatly after Abiatar confirmed Saint Nino’s words that the Robe of the Lord was held in the embrace of Sidonia, who was buried under the stump of the cypress tree which now served as the pedestal for the Life-giving Pillar.

At that time a lush, sweet-smelling, wonder-working tree grew up on a mountain over Mtskheta and, at Bishop John’s suggestion, Prince Revi, the son of King Mirian, ordered that the tree be chopped down and a cross formed from its wood. The tree was chopped down and replanted, without its roots, next to a church that was under construction. For thirty-seven days the tree retained its original appearance—even its leaves did not fade or wither. Then, after thirty-seven days had passed, three crosses were formed from its wood.

For many days after this miracle the people of Mtskheta saw a vision: during the night a fiery cross shone above the church, surrounded by stars. When morning came, two of the stars had moved away from the cross in opposite directions—one to the west and the other to the east. The fiery cross headed to the north, stopped for some time over the hill on the other side of the River Aragvi, then disappeared.

Saint Nino advised King Mirian to erect one of the three crosses in the west, on Tkhoti Mountain, and another in the east, in the village of Ujarma. But it was unclear where the third cross should be erected, so King Mirian prayerfully beseeched the Lord to reveal to him the place.

The Lord heard his prayers and sent an angel to show him the place: a rocky hill to the north of the capital, at the confluence of the Aragvi and Mtkvari Rivers. Today this hill is called Jvari (Cross) and upon it towers the magnificent church of Jvari Monastery. At the moment the cross was erected on this hill, all the idols in Mtskheta fell and shattered to pieces.

Prior to his death King Mirian blessed his heir, Prince Bakar, and urged him to dedicate his life to the Holy Trinity and fight ceaselessly against idolaters. Then he peacefully reposed in the Lord.

According to his will, Holy Equal-to-the-Apostles King Mirian was buried in the upper church at Samtavro, where today a convent in honor of Saint Nino is located. The king was too modest to be buried in the lower church, the Svetitskhoveli Cathedral, in which the Life-giving Pillar had been preserved.

Queen Nana reposed two years later and was buried next to her husband.