St. Damian the Healer, priest, and Sts. Jeremiah and Matthew, clairvoyants, of the Kiev Caves. 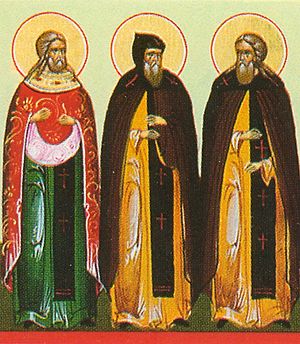 Saints Damian the Presbyter and Healer, Jeremiah and Matthew, Clairvoyants of the Kiev Caves, Near Caves, were described by Saint Nestor the Chronicler (October 27).

Saint Damian (+1071) remembered the Baptism of Rus (in year 988). The zealous imitator of Saint Theodosius (May 3) was gentle, industrious and obedient, to the joy of all the brethren. He spent the entire night at prayer and reading the Divine Scriptures. Saint Damian was strict in fasting, and ate nothing but bread and water. The Lord rewarded him with the gift of treating ailments.

In the Iconographers’ Manual it says, “Matthew has the appearance of a clairvoyant Elder, with a black greyish beard like Vlas, in black klobuk, a monastic robe, hands pressed to the heart.”

The general troparion to these saints is: “Your hearts were enlightened with the light of Christ’s commandments, and you dispelled the dread darkness. Like an abode of the Trinity, from whom we receive grace, O Fathers Damian, Jeremiah and Matthew, you heal the infirm, and you announce the future in the communion with the angels, We pray you to intercede with Christ God to grant to us the communion of the saints.”