Hieromartyr Dionysius the Bishop of Alexandria 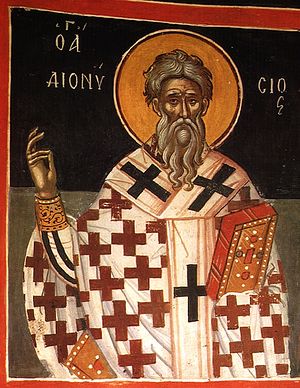 Saint Dionysius devoted much effort to defend the Church from heresy, and he encouraged his flock in the firm confession of Orthodoxy during the persecution under the emperors Decius (249-251) and Valerian (253-259).

The holy bishop endured much suffering in his lifetime. When the Decian persecution broke out, Saint Dionysius was forced to flee Alexandria, but returned when the Emperor died. He was later exiled to Libya during the reign of Valerian.

When he was able to resume his duties in Alexandria in 261, Saint Dionysius had to contend with civil war, famine, plague, and other difficulties. The saint called upon his flock to tend sick Christians and pagans alike, and to bury the dead. Concerning the death of his spiritual children he wrote, “In such a manner the best of our brethren have departed this life. This generation of the dead, a deed of great piety and firm faith, is no less of a martyrdom.”

Saint Dionysius illumined his flock through his preaching, and with deeds of love and charity. An illness prevented him from attending the Council of Antioch (264- 265), and he fell asleep in the Lord while it was in session.

The influence of Saint Dionysius extended beyond the limits of his diocese, and his writings dealt with practical as well as theological subjects (“On Nature,” “On Temptations,” “On the Promises,” etc.). He was also familiar with Greek philosophy. Only fragments of his writings survive today, most of them preserved in Eusebius, who mentions him in his CHURCH HISTORY ( Book 7) and calls him “Dionysius the Great.”

Two complete letters of Saint Dionysius are extant, one addressed to Novatian, and the other to Basilides.