St. Gregory of Chandzoe in Georgia 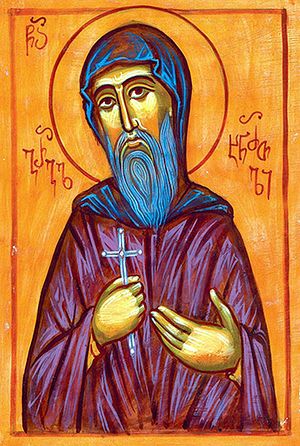 Our Holy Father Gregory of Khandzta was raised in the court of the Kartlian ruler Nerse. His family was part of the Meskhetian aristocracy. He received an education befitting his family’s noble rank and displayed a special aptitude for the sciences and theology.

The youth chosen by God was extraordinarily dedicated to his studies. In a short time he memorized the Psalms and familiarized himself with the doctrines of the Church. He also learned several languages and knew many theological works by heart.

While Gregory was still young, his loved ones expressed a wish to see him enter the priesthood. The wise youth had aspired to the spiritual life from early on, but he considered himself unprepared to bear such an enormous responsibility. “My pride prevents me from fulfilling your desire,” he told them.

Finally he consented to be ordained a priest, but the local princes sought to consecrate him a bishop. Frightened at the prospect, Gregory secretly fled to southwestern Georgia with three like-minded companions: his cousin Saba (a future bishop and the reviver of Ishkhani Monastery),

Theodore (the builder of Nedzvi [Akhaldaba] Monastery), and Christopher (the builder of the Dviri Monastery of Saint Cyricus). The four brothers were unified by faith and love of God and bound by a single desire, as though they were one soul existing in four bodies.

The brothers arrived at the Monastery of Saint John the Baptist in Opiza and presented themselves before the abbot George. With his blessing they labored there for two years. Then Saint Gregory visited the monk Khvedios, the righteous hermit of Khandzta. Prior to Gregory’s arrival, Khvedios had received a sign from God indicating that a monastery would be built in Khandzta by the hands of the priest Gregory. It was revealed to him that Fr. Gregory’s prayers were so holy that their sweet-smelling fragrance rose up before God like incense. The monk showed Saint Gregory the environs, and he was so drawn to this area that he soon returned there with the other brothers and began to build a monastery.

The monks were forced to construct the monastery in difficult conditions, since the earth was rocky and mountainous and they were not equipped with the proper tools. First they built a wooden church, and later four cells and a dining hall.

A certain aristocrat by the name of Gabriel Dapanchuli lived nearby, and Gregory turned to him for help with construction of the monastery. With great joy he donated the stone, labor and food necessary for this worthy project to be realized. In such a way the first monastery church in Khandzta was established.

Gabriel informed Holy King Ashot Kuropalates about the brothers’ activity, and the king invited their leader, Saint Gregory, to the palace.

There he received him with great honor, asked him to bless the royal family, and inquired in detail about the life and labors of the holy monks. Then he presented Gregory with a generous donation to the monastery and, having learned that the land in Khandzta could not be cultivated, bestowed upon the monastery a large plot of fertile land in Shatberdi. King Ashot’s sons, the princes Adarnerse, Bagrat, and Guaram, also donated generously to the monastery.

And so, during the bloody Arab-Muslim period of rule, when the Georgian people had sunk into deep despair, the Klarjeti Wilderness was transformed into a life-giving oasis to which the greatest sons of the nation flocked.

The rules of the monastery were strict. In each monk’s cell was nothing but a short, stiff bed and a small pitcher for water. Neither fires nor candles were lit inside.

Saint Gregory was known throughout all of Georgia. At the request of King Demetre II of Abkhazeti (837-872), Fr. Gregory built a monastery in the village of Ubisi in Imereti and appointed his disciple Ilarion of Jerusalem as abbot. He built this monastery on the border of western and eastern Georgia and in so doing foresaw the unification of the two kingdoms.

The Lord performed many miracles through Saint Gregory. Once the church bell-ringer was approaching the abbot’s cell and saw a light issuing forth from inside. He knew that Saint Gregory had lit neither a fire nor his oil lamp, and he became frightened, believing that a fire might have started in the abbot’s cell. As it turned out, others had witnessed similar wonders: when the saint stood praying, he would light up like the sun, and beams of light would emanate from his body in the shape of a cross.

Venerable Gregory stood firmly in defense of morality, and he even confronted King Ashot Kuropalates when his conduct was at odds with the values of the Georgian people. Gregory had united his companions in their love of God, but among the roses there appeared a thorn. A certain Tskir, a protégé of the Tbilisi emir Sahak, schemed to obtain the episocopal see of Anchi.

He forcibly took control of Anchi Cathedral and committed many blasphemies. The clergy, and venerable Gregory in particular, condemned his behavior, but Tskir was consumed by pride and hired a killer to eliminate Saint Gregory. Like a prophet, Saint Gregory foresaw the imminent danger but went out to meet it nevertheless. Approaching his victim, while still at a distance from him, the murderer saw a bright light enveloping the holy father. He froze in fear, and his hand immediately withered. Only the prayers of Saint Gregory could heal him and permit him to return home.

The Church excommunicated Tskir, and he fled to the emir for refuge. With Sahak’s help he returned to the throne of Anchi and sent a military detachment to destroy Khandzta Monastery.

The monks of Khandzta and their abbot met the attackers in meekness and requested time to celebrate the Sunday Liturgy. The whole brotherhood prayed tearfully to the Lord to save the monastery.

The Liturgy had not yet been completed when a messenger arrived from Anchi to report that Tskir had died suddenly.

Near the end of his life Saint Gregory spent most of his time at Shatberdi Monastery, which he himself had built. When he received a sign that his death was approaching, he distributed candles throughout all the monasteries in the Klarjeti Wilderness and requested that they be burned on the day of his death. He asked all to remember him and bade farewell to Khandzta.

On the day of his repose, holy fathers from all over Klarjeti gathered to receive a final blessing from their teacher. Gregory blessed them, admonished them for the last time, and gave up his soul to God. When he breathed his last, a voice was heard from heaven, calling him: “Do not be afraid to come, O Venerable Servant of Christ, for Christ, the King of heaven, has Himself anointed you an earthly angel and a heavenly man. Now come and approach thy Lord with great joy and prepare for exaltation, for you are blessed among the saints and your everlasting glory has been prepared!”

Abounding in blessings and perfect in wisdom, justly ruling the inhabitants of the wilderness, Saint Gregory of Khandzta reposed on October 5, 861, at the age of 102. In accordance with his will, he was buried among his brothers at Khandzta Monastery.