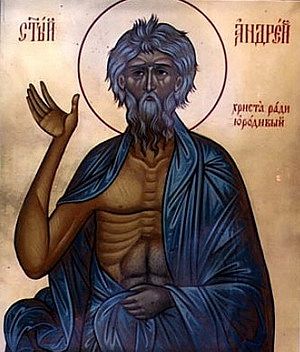 Blessed Andrew of Totma, the Fool-for-Christ was born in the year 1638 in the village of Ust-Totma and chose to leave the world while still a child. With the blessing of Stephen, igumen of the Resurrection monastery in Galich, Andrew took upon himself the arduous calling of fool-for-Christ. He lived at the church of the Resurrection of Christ in the city of Totma on the banks of the River Sukhona.

Walking barefoot in both winter and summer, Andrew wore tattered clothing, and ate only bread and water, and that in such a small quantity that it just barely kept him from starving. He prayed both day and night, and if anyone gave him anything, he would give it away to the poor. For his efforts and toil the Blessed Andrew acquired the gift of wonderworking.

One winter a blind man by the name of Azhibokai came to the blessed fool, asking for healing while offering him a large sum of money. But the fool fled away. Azhibokai then washed his eyes with snow from where the saint had stood. In doing so, he was able to see.

The time of his own death was revealed to the Blessed Andrew. He made his confession, received the Holy Mysteries and peacefully fell asleep in the Lord in 1673. Over his grave was built the bell-tower church of the holy Martyr Andrew Stratelates (August 19), whose name he bore. Many miracles were witnessed at the grave of the Blessed Andrew.