St. Theophanes the Confessor and Hymnographer, Bishop of Nicea 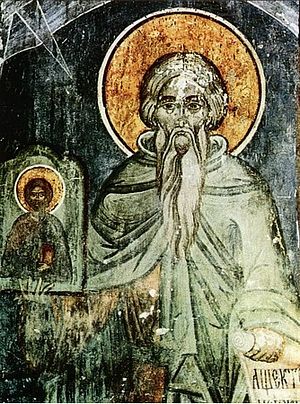 Saint Theophanes, Confessor and Hymnographer, Bishop of Nicea was the younger brother of the Saint Theodore the Branded (December 27). The brothers received an excellent education and were particularly involved in philosophy. Striving towards the knowledge of God, they settled in the Lavra of Saint Sava. Here Saint Theophanes was tonsured, and later became a hieromonk.

The holy brothers were famed as advocates of icon veneration. They boldly fulfilled the mission entrusted them by the Patriarch of Jerusalem and went to Constantinople to denounce the iconoclast emperor Leo the Armenian (813-820). Afterwards, they also denounced the iconoclast emperors Michael Balbos (820-829) and Theophilus (829-842).

The saints had to endure imprisonment, hunger, even torture. The emperor Theophilus gave orders to inscribe a phrase insulting to the glorious confessors upon their faces with red-hot needles. Therefore, they are called “Branded”. “Write whatever you wish, but at the Last Judgment you shall read your own writing,” said the agonized brothers to the emperor. They sent Theodore to prison, where also he died (+ 833), but Theophanes was sent into exile. With the restoration of Icon veneration Saint Theophanes was returned from exile and consecrated Bishop of Nicea. The saint wrote about 150 canons, among which is a beautiful canon in defense of holy icons. He died peacefully around the year 850.

Having attained an angelic state, / you sounded forth as a golden trumpet of revelation / and nourished the chosen people with your words. / The singing of your hymns gladdens the Church, / for which you struggled, O Theophanes.

Podoben: “Today You have shown forth...” / You dawned on the Church like a second sun, venerable Theophanes, / enlightening her with the beams of your teachings / as a priest of Christ our God.