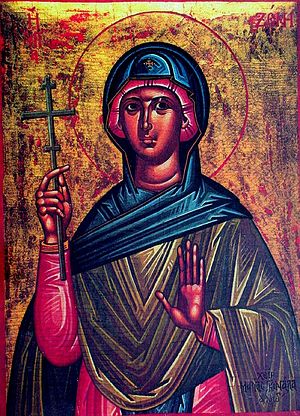 The Martyrs Zenaida and Philonilla lived in Tarsus in Cilicia during the first century, and were related to the holy Apostle Paul. They were pious Christian women, and both of them shared a love of learning. By whatever means were available to them at that time, they acquired medical knowledge.

The two sisters left their home and settled in a cave near the city of Demetriada, where they lived in constant prayer and work. The citizens of Demetriada soon learned that there were two women doctors who gladly treated everyone who turned to them for help, yet did not require payment for their services. They also healed people’s souls by converting them to Christ.

One night, some pagans went to their cave and stoned them. Saints Zenaida and Philonilla suffered martyrdom for Christ, thereby receiving incorruptible crowns of glory from the Lord.