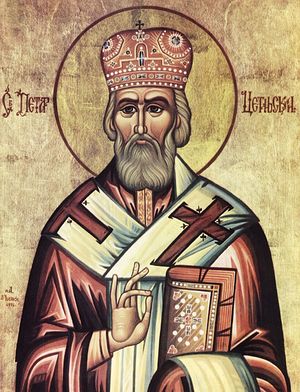 Saint Peter was born in Njegushi, Montenegro on April 1, 1747. He was tonsured a monk and ordained to the diaconate when he was only seventeen. He accompanied his uncle Bishop Basil to Russia the following year in order to study there. His uncle died within a year after arriving in Russia, and so Peter was obliged to return to Montenegro.

The young deacon was ordained to the holy priesthood, and was later elevated to the rank of archimandrite. Saint Peter assisted Metropolitan Sava in the administration of the diocese until that hierarch died in 1781. Saint Peter seemed the logical choice to succeed him.

As Metropolitan of Montenegro, Saint Peter also became the secular leader (governor) of the Montenegran Serbs. For the rest of his life he devoted himself to promoting peace and unity among warring tribes and clans, and to helping his flock rise above petty quarrels and animosity at a difficult time in their history.

Saint Peter also defended his nation against the onslaught of enemies. He successfully opposed Napoleon’s army at Dalmatia, and took part in the first Serbian uprising against the Turks.

Although he enjoyed a certain prominence as the archpastor and governor of the Serbs, Saint Peter continued to live as a simple monk in a small cell where he lived in asceticism. He fasted, prayed, and read books in French, Italian and Russian in order to increase his knowledge of Orthodox doctrine and secular culture. While he was strict with himself, the holy bishop was merciful toward others.

Saint Peter contributed to the welfare of his country through his good works. As a bishop he promoted love and peace. As governor he never sentenced a criminal to death.

Saint Peter, the Metropolitan and governor of Cetinje and all Montenegro, fell asleep in the Lord on October 18, 1830. He was succeeded by his nephew Bishop Peter II (Njegos).

Saint Peter’s holy and grace-filled relics were uncovered in 1834. They were found incorrupt and streaming with myrrh, and still rest in the monastery at Cetinje. He is honored as a powerful intercessor for his people, and for the whole Church.