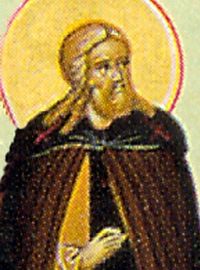 Saint Luke of Sicily was a native of the Sicilian city of Tauromenium. In his youth he left his parents and fiancée and went into the wilderness, where he spent many years in fasting and prayer. He lived the ascetic life at Mount Aetna.

Towards the end of his life Saint Luke, because of a revelation to him, founded a monastery. In order to become familiar with the rule and life of other monasteries, he visited many other cities. He died at Corinth in 820.