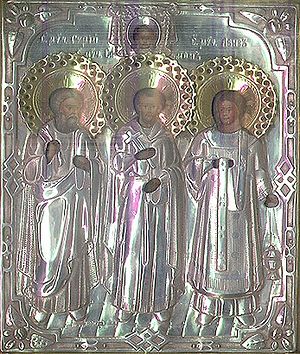 The Holy Martyrs and Confessors Gurias, Samonas and Habibus: during the persecution against Christians under the emperors Diocletian (284-305) and Maximian (305-311). The two friends Gurias and Samonas, preachers of the Word of God, were arrested in the city of Edessa.

The saints refused to offer sacrifice to the gods, and boldly confessed their faith in Christ. For this they were subjected to cruel tortures: they were beaten, hung up by their hands, heavy weights were tied to their feet, and they were cast into a stifling prison.

The martyrs endured everything with firmness and Samonas uttered a prayer to the Lord, which one of the witnesses to their death wrote down: “O Lord my God, against Whose will not a single sparrow falls into the snare. It was You Who made room for David in his sorrow (Ps. 4:1), Who proved the Prophet David stronger than lions (Dan. ch. 6), and granted a child of Abraham to be victor over torture and flames (Dan. ch. 3, ch. 14). You know also, Lord, the infirmity of our nature, You see the struggle set before us. Our foe strives to snatch us, the work of Your right hand, away from You and to deprive us of the glory which is in You. With Your compassionate eye watching over us, preserve in us the inextinguishable light of Your Commandments. Guide our steps by Your light, and make us worthy of Your Kingdom, for You are blessed unto ages of ages.” By night, they took the martyrs out beyond the city and beheaded them (+ 299-306). Christians buried their holy bodies with reverence.

After some years, the last pagan emperor, Licinius (311-324), began a persecution against Christians. Habibus, a deacon of the Church of Edessa whom the emperor ordered to be arrested for his zealous spreading of the true Faith, presented himself before the executioners when he learned they were searching for him. The saint confessed his faith in Christ and was sentenced to be burned alive. The martyr went willingly into the fire and with a prayer surrendered his soul to the Lord. When the fire went out, the mother and relatives of the saint found his body unharmed. They buried the martyr next to Saints Gurias and Samonas. 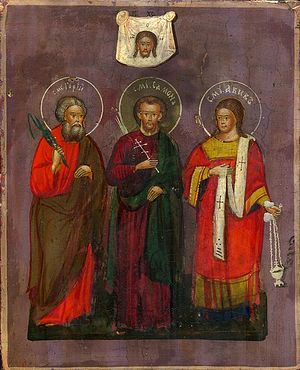 After the death of the saints, numerous miracles were wrought by them for those who entreated their help with faith and love. Once, a certain Gothic soldier, sent to serve at Edessa, took the pious virgin Euphemia as his wife. Before this the barbarian vowed to her mother Sophia at the graves of the Martyrs Gurias, Samonas and Habibus that he would do his spouse no harm, and would never insult her, but would always love and cherish her.

At the completion of his service in Edessa, he took Euphemia with him back to his native land. It turned out that he had deceived her, for he already had a wife at home, and Euphemia became her slave. Her evil husband threatened to kill her if she revealed to anyone that they were married. Euphemia suffered much abuse and humiliation. When she gave birth to a son, the jealous Gothic woman poisoned him. Euphemia turned with prayer to the holy Martyrs Gurias, Samonas and Habibus, the witnesses to the perjurer’s oath, and the Lord delivered Euphemia from her suffering and miraculously returned her to Edessa, where she was welcomed by her mother.

After a certain while the Goth was again sent to serve in Edessa. The whole city learned of his misdeeds after he was denounced by Sophia. The Goth was executed by order of the prefect of the city.

In an Akathist, the Holy Church addresses the martyrs: “Rejoice, Gurias, Samonas and Habibus, Heavenly Patrons of honorable marriage.” We pray to them for deliverance from family turmoil, and from marital difficulties, especially where one spouse hates the other without cause.

Christ our God, You have granted us the miracles of Your holy martyrs / Gurias, Samonas and Abibas, / as a stronghold and protection. / Through their prayers, strengthen those in authority in every good deed, / for You alone are merciful and the Lover of mankind!

Podoben: “Seeking the highest...” / You received grace from on high, all-praised martyrs, / and you intercede for those in the midst of temptations! / Therefore, holy ones, you freed a young woman from bitter death. / You are indeed the glory of Edessa and the joy of the world!