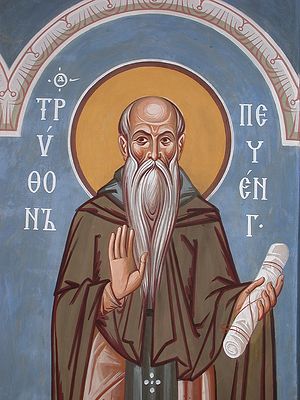 Saint Tryphon of Pechenga and Kola, in the world Metrophanes, was born in the Novgorod governia into a priestly family. The pious parents raised their son in the fear of God. From his early years Tryphon had resolved to devote his life to apostolic deeds and to go to the pagan Laplanders and proclaim the Gospel of Christ. He knew of them only through the accounts of fish vendors.

Once, while praying in the forest he had heard a voice, “Tryphon, this is not your place. An empty and thirsty land awaits you.” Forsaking his parental home, the saint went out onto the Kola Peninsula and halted at the banks of the Pechenga River, where the Lapps lived. There he began to carry on trade with them. The saint first acquainted himself with the pagan beliefs of these people and studied their language, and then began to preach the Christian Faith to them. The Lapps greeted the words of the saint with great mistrust. The holy preacher suffered much hardship, enduring hostility and even beatings. But gradually, through his wise and kindly words and meekness, many were converted to Christ.

With the blessing of Archbishop Macarius of Novogord, Saint Tryphon and Saint Theodoretos built a church for the newly-converted. In 1532 he founded the Pechenga-Trinity monastery for those eager for the monastic life, “on the cold sea, on the frontier of Murmansk.”

Tsar Ivan the Terrible helped him and richly endowed the monastery. The Enlightener of the Lapps died in old age in 1583, having lived at the Pechenga almost 60 years. Local veneration of Saint Tryphon began soon after his death.

In 1589, the Swedes destroyed the Pechenga monastery. Later, by order of Tsar Theodore, the monastery was transferred to the Kola Peninsula. On the site of the restored monastery a church was built and named for Saint Tryphon. Over the saint’s grave a church was constructed in honor of the Meeting of the Lord. Saint Tryphon has often come to the aid of perishing seamen, who call upon his name with faith.