Venerable Elias of Murom the Wonderworker of the Kiev Near Caves 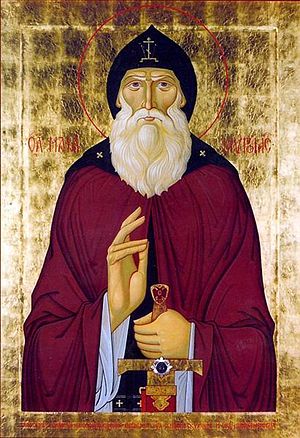 Saint Elias Muromets of the Caves, nicknamed “Shoemaker” or “Cobbler,” was from the city of Murom. Popular legend identifies him with the famous warrior hero Elias Muromets, who was the subject of Russian ballads and of Gliere’s Symphony No. 3.

St Elias died with the fingers of his right hand formed to make the Sign of the Cross in the position accepted even today in the Orthodox Church: the first three fingers together, and the two outermost fingers folded onto the palm [in contrast to the Sign of the Cross used by the “Old Ritualists”]. During the struggle with the Old Ritualist Schism (seventeenth-nineteenth centuries), this information about the saint served as a powerful proof in favor of the present positioning of the fingers.