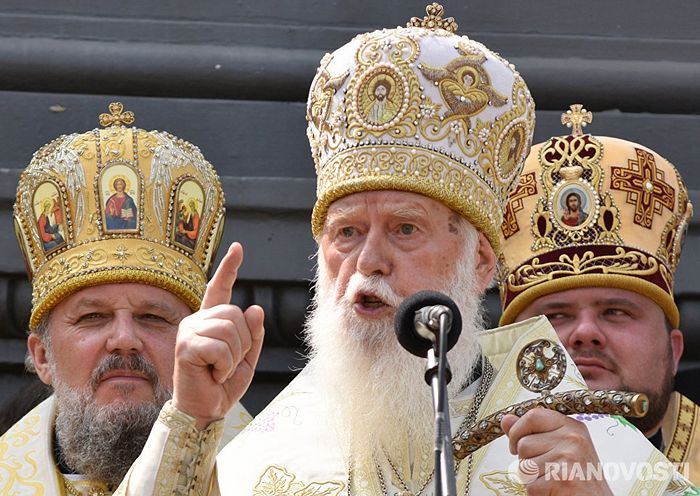 The head of the schismatic “Kiev Patriarchate” (KP), “Patriarch” Philaret Denisenko has appealed to His All-Holiness Ecumenical Patriarch Bartholomew with a request to invalidate the anathema placed against him by the Russian Orthodox Church, as KP speaker Evstraty Zorya announced on his Facebook page.

“According to canonical rules, which no one denies, the Patriarch of Constantinople has the right of the highest appellate authority in canonical disputes, when an issue cannot be resolved at the level of the Local Church, and the issue goes beyond the local framework,” Zorya writes.

According to the representative of the schismatic organization, Philaret has already filed a canonical appeal to Constantinople to consider “the removal of his rank and anathema” invalid, claiming the Moscow Patriarchate did not observe the proper canonical procedure and made its decision arbitrarily.

In 1992, then-canonical-Metropolitan Philaret of Kiev, who was elected the Locum Tenens of the Muscovite patriarchal throne following the 1990 death of Patriarch Pimen, demanded autocephaly for the Ukrainian Orthodox Church. When his demand was denied, he created and legally registered the self-styled “Kiev Patriarchate.” None of the 15 canonical Local Orthodox Churches recognize or have communion with Denisenko’s group, and he was declared anathema by the Russian Orthodox Church in 1997.

In a letter addressed to the Russian Bishops’ Council, dated November 16, 2017, Philaret stated his readiness to repent of all his sins and to work towards restoring Eucharistic communion, asking that the anathema against him be lifted. However, within days he began to back away from this position and declared he would never give up on the dream of autocephaly for the KP. A few months later, Ukrainian President Petro Poroshenko appealed to Constantinople to grant autocephaly to a new Local Ukrainian Church composed of the nation’s two schismatic bodies.

Note that a delegation of the canonical Ukrainian Orthodox Church recently met with Pat. Bartholomew and several representatives of the Holy Synod of Constantinople, in which the Ecumenical Patriarch confirmed that he views Philaret and his KP as schismatics, and that they cannot simply be legitimized by the granting of autocephaly. Fake Patriarch Philaret: “Patriarch Bartholomew is obliged to grant autocephaly”
The head of the schismatic “Kiev Patriarchate,” (KP) the self-proclaimed “Patriarch” Philaret Denisenko once again addressed the possibility of Ukrainian schismatics receiving a tomos of autocephaly in his Sunday homily, boldly asserting that the Ecumenical Patriarchate has no real choice in the matter.