In the 50s and 60s the brethren of the Lavra were called “nationalists” for speaking Ukrainian, now they are called “Muscovites” for their loyalty to the Church. 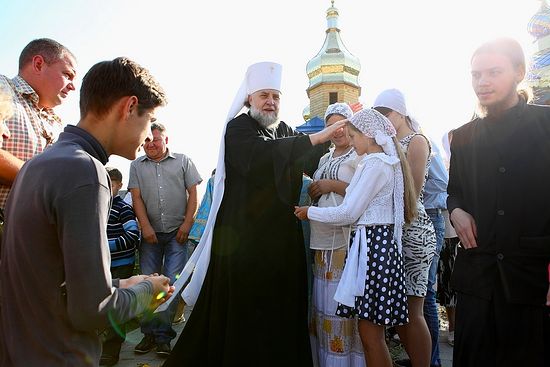 His Eminence Metropolitan Vladimir of Pochaev, the abbot of the Holy Dormition-Pochaev Lavra, one of the most sacred sites in Ukraine, has appealed to Ukrainian President Petro Poroshenko to protect the Lavra and the entire canonical Church from the increasing pressure from the state.

The Lavra has “suffered much from strangers, and now it is a pity that it is from its own,” Met. Vladimir writes in an open letter published on the Lavra’s official website.

His Eminence Metropolitan Vladimir of Chișinău and All Moldova, the primate of the Moldovan Orthodox Church of the Moscow Patriarchate, also addressed Poroshenko concerning the persecution against the Pochaev Lavra

The letter is written against the background of several recent events: On November 19, the Pochaev City Council decided to cancel the transfer of the land plots from the brothers’ residential buildings of the Lavra; then on November 23, the Ukrainian Ministry of Justice canceled the decision on state registration of the rights of usage of the complex of buildings; and again, five days later, on November 28, the Cabinet of Ministers canceled its decision from 2003 that moved the given buildings from the usage of the Pochaev Reserve-Museum to the brotherhood itself.

The pressure continued on Wednesday as representatives from the Reserve and the Ukrainian Security Service appeared at the Lavra to inspect the premises and take an inventory of the “artifacts” there—an act of psychological pressure also recently used against the Kiev Caves Lavra. Priests of the canonical Church are also being accused of inciting religious enmity and treason, with their homes and churches being rifled through by the Ukrainian Security Service.

“We live in the same country as you. All are our fellow countrymen, our compatriots, and you, Mr. President, are the guarantor of our rights and freedoms,” the Metropolitan reminds his President.

Recalling that in different times, under different circumstances, the state and the Church helped one another, Met. Vladimir therefore asks for the President’s “personal intervention regarding the events that are taking place around the Ukrainian Orthodox Church, its faithful, the Pochaev Lavra and its inhabitants, so that the pressure from the state authorities would stop and love and understanding would reign.”

He notes that the current pressure against the Lavra from various governmental bodies began precisely after the November 13 session of the Bishops’ Council of the Ukrainian Orthodox Church, when they reaffirmed their resolve to not participate in the upcoming “unification council” and the decision of the Holy Synod of the Russian Church to break communion with Constantinople.

“Tell me please, who gave them such a task?” Met. Vladimir asks, referring to the relevant governmental bodies.

He also recalls how the President himself, who was a parishioner and even subdeacon of the canonical Ukrainian Church before his political career, and his wife used to travel to Pochaev to venerate the holy relics and icons and discuss matters of eternity, and also of how his father visited the Lavra several times.

“And now we are surprised to ask,” Met. Vladimir continues, “What happened, Mr. President, that you have so changed your attitude to the Ukrainian Orthodox Church, your countrymen—your constituents, and to our Pochaev Lavra? How has it offended you, your father, or your family?”

The abbot also draws a parallel between how the monks were persecuted under the Soviet regime, being driven out of the monastery and sent to prisons, with the monastery’s churches and property being confiscated by the authorities and the monks being condemned as “nationalists” for speaking Ukrainian, and how the same faithful Ukrainians are now slandered as “Muscovites” for defending the Orthodox faith and its canons.

Likewise, in a previous statement, the brotherhood of the Lavra did not hesitate to call the compare the state’s current tactics to those of the communists.

He further entreats the President to treat the Ukrainian Church and the Lavra with understanding, love, and respect, “because it has suffered much from strangers, and now it is a pity that it is from its own.” Pressure on Pochaev Lavra continues as state reps inspect artifacts based on Soviet-era registration
The pressure on the Lavra continued yesterday as representatives from the Reserve appeared at the Lavra to inspect the premises and take an inventory of the “artifacts” there. “The Pochaev Lavra is Ruled Neither by the Ministry of Culture Nor the Museum, But by the Mother of God”
Sergei Geruk

“The Pochaev Lavra is Ruled Neither by the Ministry of Culture Nor the Museum, But by the Mother of God”
A Conversation With the Abbot of the Holy Dormition-Pochaev Lavra, Metropolitan Vladimir (Moroz)
Sergei Geruk, Metropolitan Vladimir (Moroz)
Not a single monk will compromise his conscience, leave the monastery, or endorse the new evil currents with the creation of the so-called United Local Church. Ukraine likely to transfer Pochaev Lavra to new “United Church,” says lawyer for Lavra Museum
Once the so-called “United Local Church” in Ukraine is created by Constantinople, the Ukrainian government could completely take the Holy Dormition-Pochaev Lavra away from the canonical Ukrainian Orthodox Church and give it to the new structure at its request, according to Igor Derevinsky, a lawyer for the Kremenets-Pochaev State Historical-Architectural Reserve said on Friday.