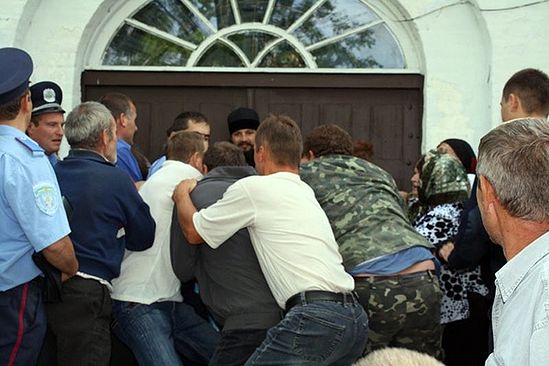 The number of church seizures by supporters of the nationalist church, recognized only by the Patriarchate of Constantinople, and various provocations and persecutions against the faithful of the canonical Church have significantly increased recently, notes the Department for External Church Relations of the Moscow Patriarchate.

However, despite the troubled times that are increasingly reminiscent of last century’s communist persecutions, the faithful of the Ukrainian Orthodox Church are standing strong and protecting their churches as able.

A recent example occurred on January 16 in the villages of Nikolaevka and Ivanovka in the Chernigov Province, when the parishioners of the Holy Cross Church resisted the illegal transfer of their community into the schismatic church. The agitators left the parish meeting with nothing, reports the site of the Ukrainian Orthodox Church.

Archpriest John Olinchuk of the Niznyn Diocese explains that as strangers had seized a church in the neighboring village the day before, the faithful of Nikolaevka and Ivanovka decided to attend their local village meetings.

As soon as the head of the village council raised the issue of switching jurisdictions, the faithful immediately protested, insisting that such matters are dealt with exclusively by the church community.

“We already know how to pray to God,” the Nikolaevka insisted.

The village head supported the faithful’s position, thus the agitators moved on to Ivanovka, where they also found no support.

In Zhytomyr, a church was seized by radicals from the Svoboda organization who insulted the local priest and refused to allow him to enter his church. The priest and the faithful bravely offered their prayers outside in the snow while the nationalists tried to drown out the prayers to God with the singing of the Ukrainian national anthem—the anthem of their nationalist religion—as can be seen in the video below:

In the Volyn village of Bronitsa, more than 100 faithful attended the parish meeting at the Nativity of St. John the Baptist Church to affirm their desire to remain within the canonical Church.

The faithful of Sosonka village in the Vinnitsa Province also held a vote to remain within the Church, counteracting the illegitimate rural community vote could not force the local church into schism.

The faithful of Holy Trinity Church of Rudoe Selo are asking for prayers, as they learned today that radicals are planning to seize their church, which is an architectural monument and the home of a miraculous icon of the Mother of God.

Unfortunately, in the village of Shandrovets in the Lviv Province, local officials and activists stormed the house of Archpriest Ilia Urusky, trying to steal the keys to St. John the Baptist Church. In the end, they went to the church to cut the lock as the police watched idly. The same activists and agitators held a meeting on January 13 without the parishioners of the church to force the church into schism.

The Church of the Annunciation in Pokhovka in the Ivano-Frankivsk Province was forcibly transferred in the same way, by a village vote with the participation of Uniates and only a small number of actual parishioners.

There have been many more such examples just since Patriarch Bartholomew granted a tomos of autocephaly to the Ukrainian schismatics earlier this month.