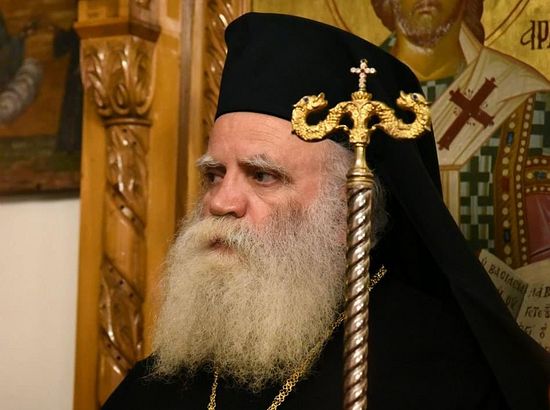 The letter was published in Greek on the Kythira Metropolis website, in Ukrainian on the site of the Ukrainian Church’s Department for External Church Relations, and in Russian by Orthodox Life.

In his letter, the Greek hierarch calls on the heads of all the Local Churches to think and strive together in prayer to preserve the spiritual unity of the Church that is “under threat and in danger” because of the “serious ecclesiological problem of the means of granting autocephaly to those to whom it was granted in the state of Ukraine.”

As have several other Synods, primates, and hierarchs, Met. Seraphim stressed that the urgent Ukrainian issue poses a canonical threat for the fullness of Orthodoxy, going beyond one Local jurisdiction. As he writes, it was hugely problematic to supposedly restore and recognize Ukraine’s schismatic jurisdictions while declaring that the canonical Metropolitan of Kiev, His Beatitude Metropolitan Onuphry, recognized by the entire Orthodox world, holds that position un-canonically.

“This goes beyond the bounds of all previous Church history,” Met. Seraphim writes, including the history of the Meletian schism that Pat. Bartholomew had distorted in his reply to His Beatitude Archbishop Anastasios of the Albanian Church. The ordinations celebrated in the schismatic jurisdictions are “obviously devoid of grace,” Met. Seraphim writes with reference to Sts. Basil the Great and John Chrysostom, and it is “unthinkable and completely incompatible with the Divine and sacred canons” to simply restore such “clerics.”

Met. Seraphim specifically notes that as “Metropolitan” Epiphany Dumenko, the primate of the schismatic church, was ordained by the defrocked and anathematized Philaret Denisenko, he has no clerical grace, “and it is impossible for this act to be healed retroactively.”

And referring to the ethnophyletism that is rampant in the Ukrainian schismatic church and which forms the basis of its autocephaly, Met. Seraphim writes that it is “always and everywhere considered unacceptable.”

As he had in his Nativity epistle, Met. Seraphim again called upon the Patriarch of Constantinople and the primates of the Local Churches to solve the Ukrainian problem in a conciliar fashion, for “only in the Holy Spirit and without interference and pressure can this hot issue be resolved in a God-loving and God-pleasing manner.”

And, the Greek metropolitan suggests, if it is too difficult to summon a pan-Orthodox council, then let the hierarchs of each Local Church voice their view on the matter, with the primates reporting these decisions at a council of the primates of the Churches.

Met. Seraphim also stressed that with this call, he is calling for the protection of Orthodox ecclesiology, the sacred canons, the conciliar system of the Church, and Orthodox Tradition.

“When someone concludes new dogmatic oroses or new canons, violating and ignoring the spirit and letter of the true holy Ecumenical Councils, they open the doors to ecumenism and every type of heresy,” the Greek prelate concludes.

In addition to the present epistle and his Nativity epistle, Met. Seraphim also appealed to Pat. Bartholomew in September, calling on him to repent and cease his communications with the Ukrainian schismatics, which, unfortunately, Pat. Bartholomew ignored. Serbian Athonite Hilandar Monastery categorically rejects Ukrainian schismatics
The Ukrainian issue has plagued and divided the Holy Mountain since the February enthronement of “Metropolitan” Epiphany Dumenko as the head of the schismatic church.