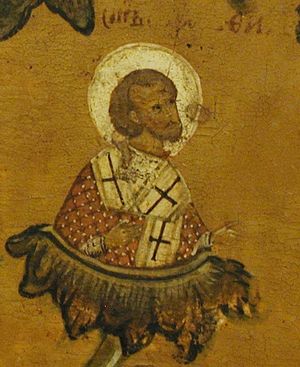 For seventeen years Bishop Amphilochius guided the Vladimir-Volhynia flock. Only a couple of generations separate his time from that of the Baptism of Kievan Rus, and the saint toiled tirelessly for the conversion of pagans to Christ. He also worked to root out pagan superstitions among the newly-baptized, while pacifying the strife among the princes of the region.

Resigning as hierarch, he continued his service to God in the Kiev Caves monastery, where he died in the year 1122. The October 10 celebration of his memory, together with the other holy hierarchs of the Volhynia region, was established in the year 1831, after the restoration of the Pochaev Lavra in Volhynia to Orthodoxy.