A New Chapter in the History of Our Church

A talk with the official representative of the American Orthodox Church in Moscow, Archimandrite Zacchaeus Wood

A talk with the official representative of the American Orthodox Church in Moscow, Archimandrite Zacchaeus Wood 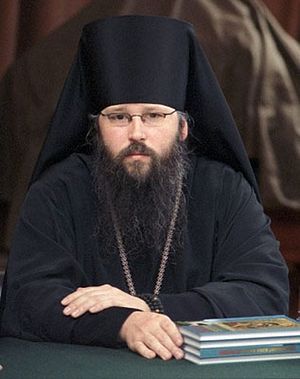 Archimandrite Zacchaeus (Wood) - Dean of the Church of St. Catherine the Great Martyr in-the-Fields, Representative of the Orthodox Church in America to the Moscow Patriarchate
- Father Zacchaeus, it is logical that for many in Russia the election of the young, I can say, not very well-known bishop as Primate of the Orthodox Church in America was a big surprise. Could you give your comment, express your opinion about this?

- I think that for many faithful of the Orthodox Church in America, it was also surprising choice, because Vladika Jonah was a bishop only 11 days at the beginning of the Council. So when candidates for a Metropolitan were discussed at the beginning of the Council, people imagined different bishops on, and the name of Bishop Jonah was not mentioned. We think and truly believe that God himself elected Bishop Jonah to serve as Metropolitan of All America and Canada. This was not a human policy, not personal desire. This is indeed visible to all, after his wise conversation with the people and speech before the elections, that really it was a man chosen by God for the position of Metropolitan.

- In this regard, could you clarify some features of the electoral process in the American Church? Obviously, in various local churches there are some differences. What, in short, is your practice?

- We have a system in which all delegates of the Council have the opportunity to vote in the election of Metropolitan. All delegates of the Council should write on special paper one name. After counting the votes, if one candidate gets two-thirds of the votes, this candidate is submitted for confirmation by the Holy Synod. The final decision is made by the Synod. And if a candidate does not get two-thirds, then the second round of the election provides the Synod with two candidates for the office of the Metropolitan – the two who gained the majority of votes. Many do not know clearly our system and think that it is “some American democracy.” In fact, delegates present their candidate to the Synod, but the Synod is not obliged to choose exactly that person. In the history of our Church there have been instances when the Synod eventually chose another candidate, not the one that receives the most votes of delegates of the Council.

This time the majority of the votes was given to Bishop Jonah, and a little less, to the Archbishop of Chicago and Midwest Job. The Synod chose Vladyka Jonah. It turned out that the decision of the Synod coincided with the desire of the people, the desire of members of the Council.

- Can laity and clergy be the delegates of the Council?

- From each parish are sent as delegates at the Council at least one priest and layman, but they could be more depending on the size of the parish. As we understand, our system is very similar to the organization of the Local Council in 1917 in Russia.

- We know that Bishop Jonah is very familiar with Church life in Russia. He has a spiritual connection here. At the same time, we know that he was engaged in missionary activities. What do you think may his election as Primate affect on the development of new missionary programs, a new impulse to the development of religious education at the American Church?

- Now we can bravely say — and all the people feel it — that the election of Metropolitan Jonah as Primate of the Orthodox Church in America is a new phase, a new page in the life of our Church. I think that is why all voted for it. Recently, it was a very difficult period in the history of our Church and people are already tired of this. Therefore, they wanted something new. Metropolitan Jonah is not linked to any scandals; he is a clean new man.

Therefore, I am confident that it will be a new page in the history of our Church: the new Metropolitan is very energetic, quite young — 49 years old. And indeed, he is driven by missionary aspiration. He made a very vivid speech at the Council, in which he talked about his plans and desires, saying that he want to see the Orthodox schools, hospitals Orthodox, Orthodox priests in the service of American universities. He has a huge desire, obviously, and I sincerely hope that we all, his spiritual sons, Orthodox priests and laity of the Orthodox Church in America will jointly support its initiatives, which I seem to be very interesting and useful. If we work together, their implementation is realistic.

- In conclusion I would like to ask: What do you see the prospects for further development of relations between our two Churches?

- Since Metropolitan Jonah lived here in Russia (he lived a year in Valaam and, as written in his biography, the abbot of the monastery, Vladyka Pankraty, was his confessor), I think that his love for the Russian Church will be entirely natural and sincere, and this is very important. We always remember that we received autocephaly from the Russian Orthodox Church, and the relationship between our churches for all of us is vital. Indeed, through the mission of Russian Orthodox Church, Orthodoxy exists on the American continent. This spiritual tradition, starting from Valaam, with St. Herman of Alaska, and with St. Tikhon, continues, and we must prevail in the spiritual unity of the Russian Orthodox Church. I think that under the wise leadership of His Beatitude Metropolitan Jonah this tradition will continue and grow; and we all in the Moscow Representation of the Orthodox Church in America will sincerely and gladly support his endeavor to maintain these ties. Beginning of Great Lent 2012. Archpastoral Message of His Beatitude, Metropolitan Jonah
Metropolitan Jonah (Paffhausen)
In the three weeks that have led us to this great and solemn first day of the Fast, the Church has set before our spiritual eyes themes of exile. When our ancestors in the faith were led to captivity in Babylon, they wept; they hung up their lyres and said, “How shall we sing the Lord’s song in a foreign land? If I forget you, O Jerusalem, let my right hand wither”

Metropolitan Jonah speaks at ROCOR fall retreat about views on Orthodoxy in America
At the 2010 fall clergy retreat of the Diocese of Chicago & Mid-America of the Russian Orthodox Church Abroad, which took place on October 15, the day following the patronal feast of the Protection Cathedral in Chicago, Metropolitan Jonah of the Orthodox Church in America (OCA) was present among the guest speakers.
×