Opening a Door for the Lord in People’s Hearts 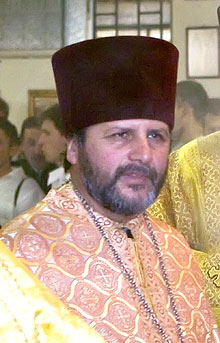 Father Alexy Aedo, Chilean native and archpriest with the Russian Orthodox Church Abroad, is the pastor in Chile of two Orthodox communities—that of St Silouan of Mount Athos in the city of Conception[1], and that of St Nectarios of Aegina in the city of Santiago[2]. While still a youth, being Chilean and Catholic, he converted to Orthodoxy. Father Alexy, a well-known missionary in his country, has devoted a lot of time and energy to preaching Christianity and Orthodoxy among the Chileans.

- Father Alexy, tell us how you became an Orthodox priest and missionary.

- I had wanted to become a priest from childhood. But I was born in southern Chile, and there it was possible to become a priest only with the Catholic Church. I began to study theology and entered a Catholic seminary. Then I became acquainted with some Orthodox families from Palestine. I saw how people in the Orthodox Church live, how they think. When I would start a conversation on some theological topic, they would tell me what the Orthodox Church teaches about it. So I converted to Orthodoxy and was received into the Antiochian Church. While still a layman, I came here, to Santiago, the capital, to complete my theological education. Once, walking home from the university, I found myself near a Russian church. I entered it, heard the Russian choir, looked at old Russian photographs….All this made a deep, deep impression on me. After that, more than once, the thought entered my mind, “O God, how good it would be if I also could someday serve Liturgy in such a wonderful church!” Later, when I was already ordained a priest, the Russian missionary-bishop Vladyka Alexander Meliant—may God rest his soul—invited me to transfer to the Russian Church. While still carrying on my missionary work in Santiago, I also took the first steps in building a church in the southern part of the country, in the city of Conception. I would like very much for a beautiful Russian church to be there, where my children and other young Chileans could go. And I ask God not to take me to Himself until there is a Russian Orthodox Church in the south.

- In addition to Conception, are there any other Orthodox parishes in southern Chile?

- In the city of Valdivia, there are Russians and Palestinians who would like to form a parish. There are also Chileans, not only in Valdivia but also in other cities, who want to convert to Orthodoxy. We hope that God gives us the opportunity to build here also, in Santiago, a large church.

- You are doing a great deal of missionary work now. Was your acquaintance with Vladyka Alexander a stimulus for this?

- Yes. Vladyka Alexander trusted and loved me as a priest. That is the best thing that can happen to a priest—when a bishop trusts him and loves him. For me, it was a gift from God.

- In Russia, many people know of Vladyka Alexander through his website and are familiar with the “Missionary Pages” which Vladyka put out.

- Both the site and the brochures which Vladyka Alexander published were extremely important and needed by us. They help us understand what Orthodoxy is. Thanks to Vladyka Alexander, we have come to understand that it is both possible and desirable to preach the Gospel through the internet: people hear us better, find out about us, get to know us; through the web, we can keep knocking patiently until the people hear us.

- In the main building of Santiago University, you have now built a movable church. Tell us, besides spiritually feeding those students who are your parishioners, do you have any success in reaching other students with the Gospel message?

- We carry on missionary work with the students, but, figuratively speaking, not “through an open door” but “through a window.” Formally, we do not have the right to preach in a secular educational institution, because the students don’t come to the university in order to be “missionized”. The founders and professors of this university are laypersons, secular people. But each time an opportunity presents itself, without pressuring or imposing on anyone, we remind them about God … and talk about the faith. Later, students will come and approach me as someone older, as to a father, in order to ask advice or to share their joys and sorrows.

- And what is the most important thing for preaching Orthodoxy among specifically Latin American youth?

- My feeling is that youth here are seeking religion, seeking the Church, but they can’t find genuine faith. Unfortunately, many join Protestants, or sects, sometimes even non-Christian sects. Young people need people to listen to them, to understand them.

We live in a time when people are weighed down by many sorrows: they are hit by economic difficulties, by war, at times by serious problems with their health. It seems to many people that their whole life is falling apart. People don’t know what they can hold onto for support, what represents authentic values, true moral guidance. Therefore, work with young people should begin with friendship. A person needs to be able to simply listen to them. And when you listen to them, they, without noticing it, begin to hear about Orthodoxy.

- Do literature, the arts, and philosophy help to find a common language with youth?

- Yes, through philosophy and ethics it’s easier for me to find a common language with youth. Young Chileans are inclined to relate critically to the way things are in their homeland, and indeed, to the world in general. And they want something they can grab hold of, like the tiller on a boat or the helm on a ship, that can help them steer their way through the surrounding world. Through this desire for a true moral compass, it is easy to move the conversation to the plane of philosophy and ethics. The next step up is religion.

- This is a very sorrowful, contradictory phenomenon. The deep, painful wounds of the past have still not healed. Many of those who have gone into schism still do not understand that over the course of time, the situation in Russia has changed. However, those dear old priests who have preserved the traditions and cherish tradition have, together with us, embraced reunification, but some young priests have left. It may be that the latter are guided by personal motives—material interests, ambition—in a word, private interests. And at times they forget about obedience to the Church.

One Russian batiushka, a monk, lives on a mountain and abides in silence. Talking with him is like talking with a saint. He also didn’t accept the reunification. But I would prefer that he were a little less saintly and stayed with us.

- Tell us, what to you is the most interesting thing that is happening today in the Russian Orthodox Church?

- Between the West and the East exists a colossal difference in world view. Here in the West, Church and culture are separated. In the Orthodox East, they [Church and culture] represent a single, united whole. Matushka[3] and I were in Greece. In Athens we asked a Greek, “What is more important to you, to be Greek or to be Orthodox?” He answered that they were one and the same thing. Russians think the same way. And I must explain to the Chilians that I am not Greek, not Russian—I am Orthodox. The Russian Church is a kind of model for us, integrating spiritual life with national culture. And I very much wish that the Chilean people would perceive and assimilate the Gospel of Christ in the way that the Russian people embraced the Gospel and integrated it with their own traditions and culture. O Russia! Help us find the path of how to be faithful to our national culture in the light of the Gospel teaching!

- Father Alexy, in Latin America, [the project of] the “Days of Russian spiritual culture”[4] has just been completed. What kind of mark have these days left in the souls of those Chileans who are still not in the Church, who consider themselves to be secular people? From your point of view, could it happen that, after visiting the concerts of Sretensky Monastery’s choir, the exhibition “Holy Russia, Orthodox Russia [‘Rus’[5]]”, and the cinematic festival of Russian films, there will be awakened in them an interest in spirituality, and in true Russian culture, which is closely bound up with the idea of Orthodoxy?

- Of course. I think this [project] will also help them draw closer to the Orthodox faith because during this period of the Days of Russian culture, Chileans have had the chance to converse with clergy—with priests and hierarchs. After 20 years in the priesthood, I have come to the following conclusion: people may be very far from the Church, perhaps not even believe in God … until they become acquainted with a priest. The Lord God literally opens for them a little door, tiny and unnoticeable; and—lo!—faith appears. Such a person suddenly turns to us with a request to bless his home, to bless his children. Then he learns about the heights of monastic life, and is beside himself with joy and wonder about it. He starts reading the lives of saints—Seraphim of Sarov, Silouan of Mount Athos, Herman of Alaska, and other ascetics of piety. He learns about fools-for-Christ and begins to study the holy fathers. For confirmation in the faith, people often don’t need concepts and theories, but simply to see the way which God Himself trod. By God’s grace, a person talks with a priest and finds the footsteps of the Lord.

[1]Conception: named for the Conception of the Virgin Mary by her previously childless parents. Latin America received Christianity through the Catholic Church, and this Christian influence is often seen in geographical names.
[2]Santiago: In Spanish, Santiago (Sant Iago) means Saint James. Santiago in Chile is named for Santiago in Spain, where the relics of the Apostle James are located
[3]Matushka: The Russian name for a priests wife.
[4]Days of Russian spiritual culture: For more on the Russian Churchs recent month-long project Russian Spiritual Culture Days in Latin America, see pertinent articles such as Russian Orthodox Cathedral Opens in Cuba at the website:   http://choir.pravoslavie.ru
[5]Rus is a spiritual and historical concept that starts with Prince Vladimir and the baptism of Rus in 988 and continues up to the present, encompassing Russia, the Ukraine and Belarussia, and looking at it all from a spiritual point of view: Holy Rus, Holy Russia, Holy Orthodox Russia.
See also

“The Indian mission will be the most fruitful mission in the world!"
Clement Nehamaiyah (Nehemiah)
When we decided to embark upon the Ark of Salvation—the Holy Church—many times we were told by our Anglican friends that we were making a mistake, but by the mercy of God we were happy and willing to make this mistake. A Russian Orthodox Church Will Be Built in Chile's Second-Largest City
Fr Alexei is Chilean by birth, having accepted Orthodox Christianity with his heart and soul. By his efforts and persistence, his focus and a great deal of labor, with reliance on God’s help, work on building the first-ever Orthodox Church in the south of Chile commenced in August 2011.

Orthodox Website Launched in Chile
On July 6, 2010, Bishop John of Caracas of the Russian Orthodox Church Outside of Russia (ROCOR) sent his blessings for the website, Mission Ortodoxa en Chile, recently created by ROCOR parishioners in Chile.
×