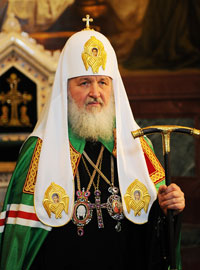 The enthronement of His Holiness Patriarch Kirill of Moscow and All Russia took place at the Cathedral of Christ the Savior on February 1, 2009. He was elected to the Moscow Patriarchal Throne by the Local Council [Pomestny Sobor] of the Russian Orthodox Church on January 27.

The bells started ringing fifteen minutes before the Divine service; as the nominated Patriarch arrived, festal pealing began. At the entrance to the Cathedral, the elected Primate of the Russian Church was met with the traditional bread and salt.

The nominated Patriarch Kirill was vested as bishop plus the great paraman, a piece of cloth with the embroidered cross that is customarily placed on the Patriarch.

At the minor entrance, the clergymen sang the troparion and kontakion for Pentecost instead of the troparia of the day.

The clergymen in the sanctuary and worshipers at the church lighted candles as the Trisagion was being sung.

Having turned eastward, they bowed three times together with the Patriarch, and, taking his arms, brought him to the Patriarchal throne. Then they turned westward, and Metropolitan Vladimir said, "The Divine grace, which healeth that which is infirm, and completeth that which is wanting, and always careth for its holy Orthodox Churches, seats our father, His Holiness Patriarch Kirill of the great city of Moscow and All Russia on the throne of the holy Primates of Russia, Peter, Alexy, Jonah, Makary, Philip, Hermogen and Tikhon…' Saying "In the name of the Father. Amen. And of the Son. Amen. And of the Holy Spirit. Amen," the eldest metropolitan seated the nominated Patriarch Kirill on the Patriarchal Throne three times.

Metropolitan Vladimir of Kiev and All Ukraine then proclaimed Axios (Greek for "he is worthy") that was echoed many time by the clergymen in the sanctuary, the choirs of the Cathedral of Christ the Savior, of the Lavra of the Holy Trinity and St Sergius, the Moscow Sretensky Monastery, of St Nicholas Church at the Tretiakov Gallery, and by all the worshippers.

After that Patriarch Kirill was vested in the patriarchal liturgical garments. Two panagias and a mitre were placed upon him.

Metropolitan Philaret of Minsk and Slutsk, Patriarchal Exarch of All Belarus said the Great Litany; Metropolitan Yuvenaly of Krutitsy and Kolomna - a prayer to God the Almighty. When the protodeacon was saying the Great Praise, in which all Primates of the Local Orthodox Church are mentioned, the Primates present at the church came out from the sanctuary to bless the worshippers.

The Divine Liturgy at the Cathedral of Christ the Savior continues after the office of the enthronement.

The Russian Orthodox Church Outside of Russia - Official Website Metropolitan Kirill of Smolensk and Kaliningrad Elected New Patriarch of Moscow
On the evening of January 27, 2009, the results of the election of the new Patriarch of Moscow and All Russia were announced. The Local Council [Pomestny Sobor] elected His Eminence Metropolitan Kirill of Smolensk and Kaliningrad as the head of the Russian Orthodox Church. On December 5, 2008, the Patriarch of the Russian Orthodox Church, His Holiness Alexei II, Patriarch of Moscow and all Russia, reposed in the Lord